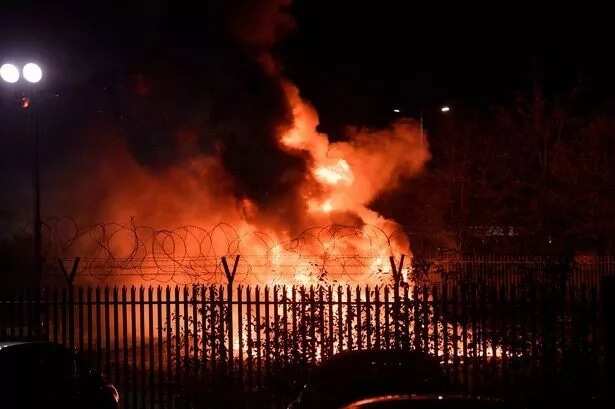 The Wuse 2 office of the Economic and Financial Crimes Commission (EFCC) was gutted by fire on Monday night, November 19.

According to Daily Nigerian, EFCC spokesman Tony Orilade confirmed the incident, adding that men of the Federal Fire Service (FFS) Wuse Zonal office had successfully subdued the inferno that almost razed down the Wuse 2 Zonal office of the commission.

The EFCC in a statement said: “The fire fighters led by the Sector Commander, Melone Onyekachi, arrived the Wuse 2 office of the Commission when the Service was alerted of the fire by the Incident Duty Officer of the Commission, Kayode Oyetunde at 1910 hours.

“The fire started at the former newsroom which now serves as storage for ICT equipments that were retrieved from the commission former offices scattered across the Capital City.

The former newsroom is domiciled in the two Storey Costa Hall which was commissioned by Dr. Antonio Maria Costa on 13th November 2007. The building currently houses the Data Centre and the Combined Inter Agency Task Force.

“When asked what could have cursed the fire, Mr. Onyekachi said, “Our duty is to put off the fire; that we have successfully done. There is another department that will come and ascertain the cause of the fire.”

“Two officers attached to the Combined Inter-Agency Task force who were trapped on the second floor of the building were successfully rescued before the fire was eventually subdued. The extent of the damage would be ascertained after stock taking.

“The Commission’s Chief Security Officer, CSO, Nasir Abdullahi, DSP immediately after the fire was curtailed, went to the Maitama Police Station to incident the fire outbreak. Policemen from the station who followed him to the commission, however, promised to return for further enquiry.

“Management and officers of the Commission who were on ground to concertedly subdue the fire were: the Supervisory Secretary, Mr. Chile Okoroma; Director, Finance and Accounts, Jubril Manigi; Zonal Head of Operation, Mohammed Rabo; DD, Admin, N.T Ibrahim; Head of Legal, Kabir Latona; Head of ICT, Isah J. Abdullahi among others,” the statement added.

According to reports, the bank was engulfed in fire as a result of a vehicle that had earlier gone up in flames.

The Lagos State Fire Service was at the scene of the incident to put out the fire, while security operatives are also on ground to maintain law and order.