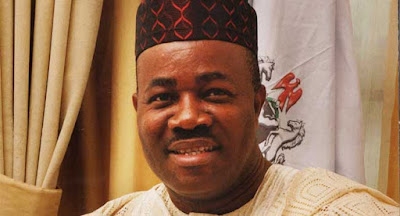 Mr. Enang, a former senator, told journalists in Uyo, the state capital, that Akwa Ibom received more money from the federation account than all the states in the South-East put together, yet did little with the huge income.

He said the allocation to the state was also more than that of all the states in the North-East put together.
Mr. Enang said given such revenue, something must be seriously wrong for the state to go broke today.
“If Akwa Ibom workers complain (that their salaries have not been paid), then something is wrong with governance. Something is wrong with the application of the funds. Something is wrong with the way you treat the people,” he said.
Mr. Enang said he was worried that Governor Udom Emmanuel was taking out billions of naira from the state funds to settle loans obtained by Mr. Akpabio.
The former senator said Mr. Emmanuel’s administration was coming to the state as a “receiver” because “Akwa Ibom was almost broke and owing one particular bank too much”.

“The bank had to post a governor to Akwa Ibom, and that process of posting a governor as a receiver as been completed by the fact that the governor is from that particular bank,” he said, apparently referring to Zenith Bank, where Mr. Udom worked before his election as governor.

Mr. Enang, who challenged journalists to use the Freedom of Information Act to find out the state of Akwa Ibom finances, said the governor should be open enough to tell the people the debt profile of the state and how much money the government was paying out monthly to service loans.
The people deserved the right to know how much their state is worth, he said.

He said it was time Nigerians began holding governors accountable for what was happening in their states, adding that it was erroneous for people to think that it was the sole responsibility of the federal government to manage the nation’s economy.

Mr. Enang said it was becoming “fashionable” for government at the states, particularly the ones controlled by the Peoples Democratic Party, to blame the All Progressives Congress-led government at the centre, for whatever was happening in their states.

“I think it is insulting for you to think that people do not think, and that they do not know that you have collected your money,” Mr. Enang said.

Mr. Enang, a former ally of Mr. Akpabio’s, fell out with the former governor after he lost his bid to return to the senate during the 2015 election.