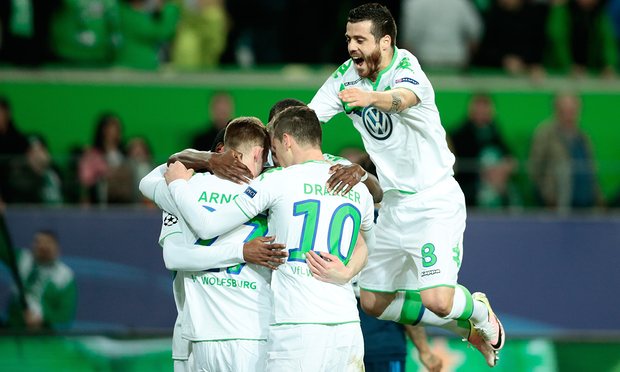 Real Madrid were dealt a surprise blow in Germany as they were defeated 2-0 by Wolfsburg in the quarter-finals of the Champions League.

Goals from Ricardo Rodriguez and Arnold make it very difficult for Zinedine Zidane men to move into the next round.

The visitors had the ball in the back of the net after just two minutes as Ronaldo fired home from inside the box. However, the flag was raised and the goal was disallowed.

Los Blancos seemed pretty confident at the start. However, the hosts were threatening with their counter-attacks.

Wolfsburg made it 1-0 after 15 minutes. They were awarded a penalty as Casemiro brought Schurrle to the ground inside the box. Rodriguez sent his effort past Navas to give his team the lead.

Ten minutes later, the Germans scored a secong goal as Arnold turned a low Henrique cross past Navas from close range after some terrible defending from Real Madrid.

That was a big blow for Los Merengues, who could have conceeded a third goal as Schurrle forced Navas into a smart stop in a counter-attack.

Real improved after the break and Ronaldo had a major chance to score as he received a pass from Isco and shot from close range, but Benaglio made the save.

Wolfsburg focussed on defending and didn’t conceed more opportunities for the visitors.