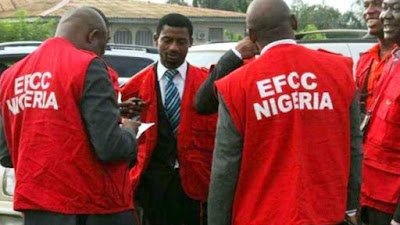 A court in Nigeria has sentenced a former local MP to 154 years in jail for corruption and money laundering.
Gabriel Daudu, from central Kogi State, was found guilty of 77 charges, Nigeria's anti-corruption body says.

But the judge ruled that the sentences would run concurrently, meaning Dauda will only spend two years in jail.
Corruption is endemic in Nigeria and so far the Economic and Financial Crimes Commission (EFCC) has only managed to secure a handful of convictions.
President Muhammadu Buhari won elections last year, promising to tackle the problem.
Africa Live: News updates from around the continent
Sharing Nigeria's cake
Buhari's battle to clean up Nigeria's oil industry
A number of prominent officials from the previous government have been arrested and put on trial, but some accuse the president of only targeting the opposition.
The EFCC says Mr Daudu, who was put on trial in 2010, was involved in laundering about $7m (£5m).
Delivering the judgement in Kogi state capital, Lokoja, Justice Inyang Ekwo said the persecution had "proved its case beyond every reasonable doubt", the EFCC said in a statement.
It is not immediately clear whether Dauda will appeal against the ruling and whether any of the stolen money was recovered.