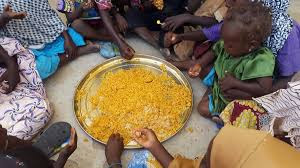 The Bring Back Our Girls (BBOG) advocacy group has warned the Federal Government against playing politics with the humanitarian situation in the North East, saying the fortunes of the Internally Displaced Persons IDPs, in the country have not improved.

Specifically, the group said many of the IDPs were at present dying as a result of starvation, in apparent response to reports that the African Union had given the government a pass-mark in its handling of IDPs.

This came as the Federal Government weekend signed a tripartite agreement with the United Nations High Commission for Refugee, UNHCR, and Cameroun for the return of thousands of Nigerian refugees currently taking refuge in that country. Commissioner for Political Affairs and Head of the AU Humanitarian Mission, Dr Aisha Laraba Abdullahi, who visited the Yola IDP camp in Adamawa State also at the weekend, was quoted as expressing delight at government’s handling of IDPs.

However, spokesman of the #BBOG, Sesugh Akume said: “The report does not represent the true situation of IDPs in northeast Nigeria. Reports reached us that only yesterday (Saturday) the IDP camp in Biu was flooded by rains. IDPs at Teachers’ Village, Maiduguri, have died of starvation. Our compatriots from Damasak, who are refugees in Niger are in a horrible condition. We’re now resettling the IDPs — NEMA Meanwhile, the National Emergency Management Agency, NEMA, has said the Federal Government was now at the stage of resettling the IDPs. Director General of the agency, Muhammad Sani-Sidi, disclosed this when he received the Commissioner for Political Affairs and Head of the AU Humanitarian Mission, Dr Aisha Laraba Abdullahi in Abuja.

A statement signed by thee Senior Information Officer of NEMA, Sani Datti, quoted the DG as saying: “We have moved from the emergency response stage to recovery and resettlement of the IDPs.” He said there were about 80,000 displaced Nigerians currently taking refuge in Cameroon and that the federal government had been making efforts to cater for all their basic needs.

He urged the visiting commissioner to use her good offices as Commissioner for Political Affairs of the African Union to seek for more assistance and support for the affected persons and the states. Earlier, the Commissioner said they were in Nigeria to assess the situation of IDPs and to discuss areas of possible support. She added that displaced Nigerians were of concern to the African Union, as records available to AU indicate that there were about 13 million displaced persons and three million refugees on the continent.

Meanwhile, the Federal Government has signed a tripartite agreement with the United Nations High Commission for Refuge, UNHCR, and the Republic of Cameroun for the return of thousands of Nigerian refugees who had fled for safety and are currently taking refuge in that country. The Director General of the National Emergency Management Agency, Muhammad Sani-Sidi, disclosed this when an African Union Humanitarian Mission, led by Dr.