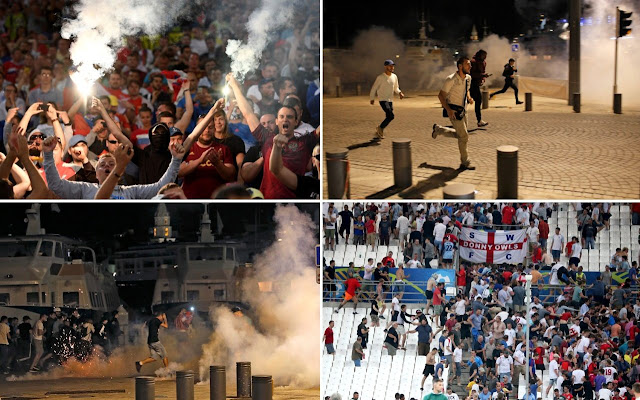 Euro 2016 was again marred by further scenes of violence among groups of Germany and Ukraine supporters ahead of their match at Stade Pierre-Mauroy.

Rival fans clashed in the centre of Lille, close to the Gare Flandres, where a number of supporters have been arriving in recent days.

Germany and Ukraine fans were seen fighting, throwing chairs and bottles near La Grande Place, an area of bars and restaurants which had earlier seen dozens of supporters - including some from Wales and England, whose teams meet in nearby Lens on Thursday - mixing in a peaceable atmosphere.
A group of German fans, understood to be part of a far-right contingent, threw beer cans at media representatives as they attempted to film close to the station. Some of the bars were later closed to allow a clean-up of the area.

The scenes cast a further shadow over the opening days of the tournament in France, which has seen violent confrontations between police and supporters in Marseille in particular.

English and Russian counterparts were teargassed after clashes near the old port area, shortly before the meeting of the two sides in their Group B opener.

The 1-1 draw was followed by more unsavoury scenes as Russian hooligans charged England fans after breaking through a poorly-segregated area of the stands.

UEFA issued a statement on Sunday to express its "disgust" at the incidents, and threatened that England and Russia could face expulsion from the tournament should any further skirmishes take place.

Meanwhile, the French government has announced it will prohibit the sale of alcohol close to stadiums for the remainder of the tournament, as part of efforts to curb the violence.