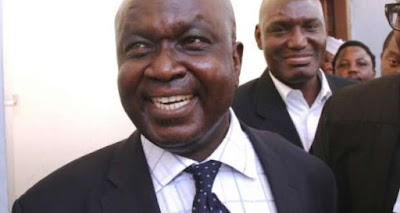 An Economic and Financial Crimes Commission’s witness in the ongoing trial of Mr. Rickey Tarfa (SAN) has revealed how Tarfa allegedly paid money into the bank account of two federal High Court judges.

The witness, Tosin Owobo, said this while being led in evidence by the counsel for the EFCC, Mr. Rotimi Oyedepo.

The witness, who is an EFCC operative, told the court that in the course of investigation, the commission wrote letters to Zenith and Fidelity banks requesting information on Tarfa and Awa Ajia Nigeria Limited’s account.

The responses showed that the signatory to the company’s account was a Justice which was later found to be Justice Hyeladzira Nganjiwa.

Also featured in the statement of account was one Mohammed Nasir Yunusa, another judge of the Federal High Court.

The witness gave a breakdown of some transactions in the account linking Tarfa and the two judges from the statement of account received.

According to the witness, several payments were made into the account at different times by the suspect.

He added, “On February 9, 2016, a transfer from Hauwa Nig. Ltd. to Mohammed Yunusa the sum of N300,000 was made. Also on transaction tickets which were issued to the bank with instructions which the account should be debited and credited, they discovered that the signature instructions were signed by Tafar.

The defence counsel, Abiodun J. Owonikoko (SAN), raised several objections to prosecuting counsel tendering some exhibits before the court, which the court overruled.

Justice Akintoye adjourned the matter till and October 13 and 14, 2016, for further hearing.