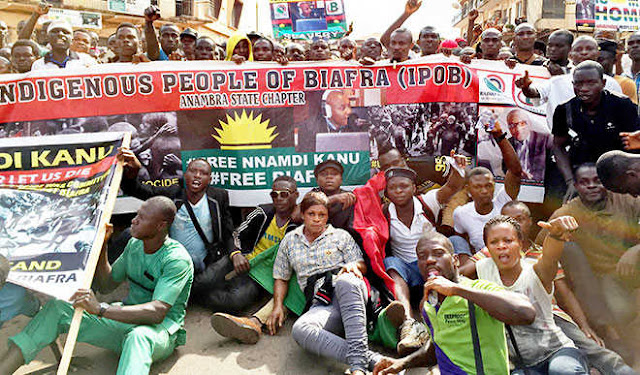 The Supreme Council of Elders of the Indigenous People of Biafra on Wednesday disowned the Niger Delta Avengers and Movement for the Actualisation of the Sovereign State of Biafra.

“Preachers of violence might be infants or non-existent during the 30 months Nigerian civil war,” the IPOB elders said.

The Deputy Chairman of the Supreme Council of the Indigenous People of Biafra, Dr. Dozie Ikedife, said this in Nnewi, Anambra State during a news briefing.

Ikedife was reacting to claims by some leaders of IPOB and the Movement for the Actualisation of Sovereign state of Biafra that the groups were aligning with Niger Delta avengers and other militants.

Ikedife said there was no such thing, adding that he saw the Biafra war from beginning to the end and witnessed how millions of people, especially from the South East were slaughtered and property worth billions of pounds destroyed because of the struggle for self-determination.

He said nobody in his right senses would talk about a repeat of the 30-month pogrom that inflicted pain and sorrow on almost every family in the land.

He insisted that he would certainly not support any war because any life lost would not be replaced, but properties could be replaced.

The ex-Ohanaeze national president said, “The IPOB group I belong to is governed by the Supreme Council of Elders. There is a faction led by Nnamdi Kanu that abuses the elders, preaches violence and ethnic hatred.

“We do not believe in that. The MASSOB led by Ralph Uwazuruike, from inception, preaches non-violence based on the non-violence philosophy of the former Indian Prime Minister, Ghandi.”

“If the militants have been blowing up pipelines, I don’t see how my group that has been following legal and diplomatic process will align with them. We have quite a different philosophy and modus operandi towards the issue of self-determination.

“The aim may be one but the method differs. We have not and cannot depart from dialogue, legal and diplomatic process and of course you know we are in court with the Federal Government over this issue of self-determination.”

“Why I Detained Wole Soyinka During The Civil War” – Yakubu Gowon

The United Nations in its latest State of Food Security and Nutrition in the World report says more people are going hungry.Released on Monday, the

A Nigerian couple has welcomed a set of twins three weeks apart. According to the husband, David Bankole, he and his wife got married in 2003 and waited

A total of 602 Boko Haram members have denounced their membership of the group and sworn oath of allegiance to the Federal Republic of Nigeria. The former

Femi Fani-Kayode, former Minister of Aviation has reacted to the allegations of corruption against the Minister of Niger Delta Affairs, Godswill Akapbio, by former Acting Managing Director