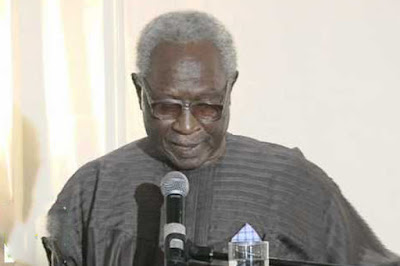 Popular writer and literary icon, Captain Elechi Amadi is dead. He was 80.

His wife represented him yesterday at Total Exploration and Production (E&P) Nigeria Limited’s Port Harcourt District’s 2016 Book Reading, with the theme: Knowledge is an Edge, organised by the Rivers State Ministry of Education in Port Harcourt, the state capital.

The governor described his passage as a loss to the country.

In a condolence message to the family, people of the state and the country, Wike noted that Captain Amadi’s contributions to the development of the nation were legendry.

He said his literary works promoted Rivers State, the Niger Delta and the country, hence he would be celebrated by the state and lovers of literature across the country.

Wike said the late Amadi was a consummate patriot, a great literary icon, a soldier’s soldier and development enthusiast.

He prayed God to grant his family the strength to bear the irreparable loss.

He said: “Today, we mourn the passage of a globally acknowledged literary icon and role model who lived an exemplary life.

“Captain Amadi certainly was a man of many parts, who touched lives in many ways. He will be remembered for good by many people who met him physically or through his books. He was a well known author, publisher, soldier and statesman who was concerned about a better society.

“My generation will definitely remember him more for his great books, such as The Concubine, The Great Ponds, Sunset in Biafra, Estrangement, The Slave and a collection of poems.

“It is regrettable that Amadi passed away at a time when Rivers, our dear state, is still far away from the aspirations of its founding fathers, like him and most sons and daughters of the state. There is no doubt that Elder Amadi and other founding fathers will be weeping in their graves at the state of Rivers State.

“Nigeria and the international literary community has lost a creative giant.

“The departed patriot, no doubt, had a remarkable life and he will surely be remembered for serving humanity with literature and his interventions.”