- Speaking on behalf of the security chiefs, the acting IGP Mohammed Adamu, said they resolved at the meeting to further provide adequate security within the country, during and after elections

Details of President Muhammadu Buhari’s meeting with Nigeria’s security chiefs, Tuesday, February 19, have emerged as the latter briefed newsmen, saying they will not allow the forthcoming elections in the country to be disrupted.

Daily Trust reports that President Buhari’s meeting with the security chiefs’ meeting at the Presidential Villa that lasted for over an hour. 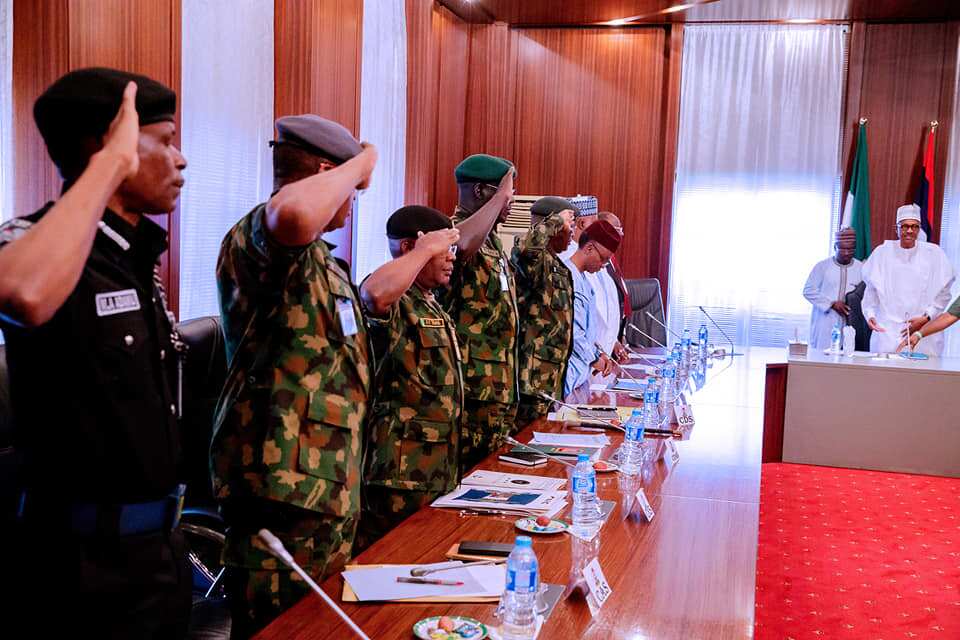 READ ALSO: God has ordained Atiku as next president of Nigeria - Prophet Udoka

Speaking with newsmen after the meeting, the acting IGP said, following the postponement of the 2019 elections, they had resolved to further provide adequate security within the country.

He said: “Today, members of the security community and intelligence community came and briefed Mr President on the security situation in the country. We deliberated on the consequences and came up with the resolve to further provide adequate security within the country so that the electorate will come out and cast their votes without any fear of molestation.

“Every Nigerian is encouraged to come out on the election day and cast his or her vote without any fear of molestation. The security personnel are ready and prepared to protect everybody. Anybody that feels that he can come out and disrupt the process should have a rethink because that situation will not be allowed. If you plan and allow yourself to be used as touts, whatever happens to you, you will take it,” he said.

Meanwhile, Legit.ng previously reported that the presidency said that President Buhari’s comment on ballot box snatchers is a “strong message’’ against the long history of savagery associated with elections in the country.

Buhari had on Monday, February 18, during the emergency caucus meeting of the APC in Abuja, warned that anyone who dared to snatch ballot boxes during Saturday’s elections would be doing so for the last time.

Speaking to State House Correspondents, presidential spokesperson, Malam Garba Shehu, said that the president had the safety and security of Nigerians uppermost in mind when he made the comment.

He said, therefore, that the president should be praised rather than criticised for issuing “the stern warning to potential ballot box snatchers’’.

NAIJ.com (naija.ng) -> Legit.ng: We have upgraded to serve you better!