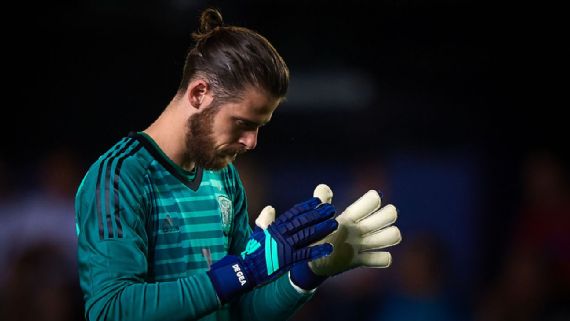 Manchester United goalkeeper, David de Gea, was “inconsolable” after his howler saw Barcelona progress to the semi-finals of the Champions League, apologising to his teammates.

De Gea had a game to forget on Tuesday night at Camp Nou, letting a tame effort from Lionel Messi squirm through his grasp and into the back of the net.

United had started the match well, but two goals from Messi in the space of four minutes gave the visitors a mountain to climb.

According to The UK Sun, De Gea was furious with himself for the costly error and apologised to the rest of the team in the dressing room after the game.

The Spaniard even claimed that he felt the side could have won the tie had he not made the mistake, with the side having needed just two goals to go through at that point.

Manager Ole Gunnar Solskjaer was sympathetic afterwards, saying: “That’s unfortunate with goalkeepers. When you make an error it can get highlighted and that’ll be remembered tonight.

“But he made some fantastic saves as well, which all in all, his contribution to the team is good but sometimes that happens in football.

“You know when you get to this level you cannot slip up and you cannot make mistakes and you’ve got to take the chances you get yourself. And we didn’t capitalise on our great chance, but then they have their first two shots on target, that’s two goals and game over.”