Igboho is the headquarters of Oorelope Local Government Area of Oyo State.

DAILY POST gathered that roads leading to the ancient Igbo-Oba where three former Alaafin were buried witnessed heavy traffic as the convoy of Alaafin of Oyo, His Imperial Majesty, Oba Lamidi Olayiwola Adeyemi III sneaked through the waiting and cheering crowd lined up to welcome the monarch. 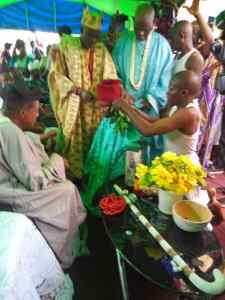 Our correspondent reports that the installation ceremony followed the approval of the Oyo State Government to the election of the prince by kingmakers on July 17, 2017.

The event featured the traditional decoration of the monarch with “Akoko leaf” by the Alaafin of Oyo in the presence of traditional rulers, government functionaries and the cheerful people of the community.

Gunshots by hunters rented the air, which signaled the reign of the new traditional ruler amidst jubilation and excitement. 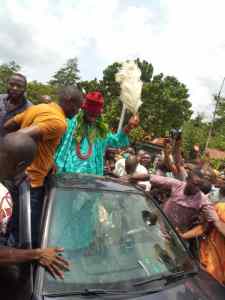 After the installation rite, the Alaafin admonished the new monarch to ensure he harmonizes relationship between his subjects and other traditional rulers within the community as a way of building on the legacies of his ancestors.

Chairman of Oorelope Local Government Area, Hon. Samuel Okunlade, while speaking, expressed profound gratitude to the executive governor of the state, Abiola Ajimobi, for approving the choice of the kingmakers to fill the vacant Alepata stool.