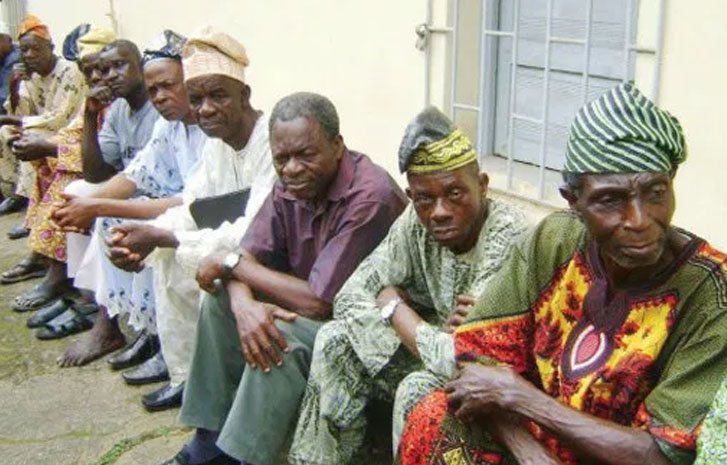 Nigeria Union of Pensioners, NUP, South West Zone, has condemned the non-payment of their members’ entitlements by some state governors in the country.

The pensioners, who threatened to take action by filing charges against the governors in the law court for subjecting their members across the country to untold hardship, stated that most of them who retired between 2008 and 2019 were yet to receive their gratuities.

According to the Zonal Chairman, Ayo Kumapayi as well as Olusegun Abatan, the spokesman for the zone, during the union’s zonal meeting held on Thursday in Akure, the Ondo State capital, emphasized that the ugly trend is not limited to the south west but across the country

While maintaining that the situation calls for urgent attention, the union stated that, “It has become a tradition of Nigeria governors to the extent that Pensioners have not been paid from 2008 to 2019.

“It has also become a very serious situation for many of our Pensioners are now dying prematurely as result of this non-payment of gratuity.

“So, the South west zone of NUP has decided to test certain part of Nigeria constitution in a competent law court.

“We want to determine it and if it is unconstitutional then we will go further to determine the next level to take,” it said.

While lauding the local government autonomy, the union explained that governors have for so long dabbled into the fund of the local councils in their states which they said has been one of the avenues they use to short change Pensioners and workers in their various states.

The pensioners who called for the stoppage in the payment of life pension to governors and lawmakers, also frowned at the huge salaries and allowances they receive while in office with a call for immediate reduction.

“It is distasteful, wicked and self-service that civil servants worked for 35 years and entitled for gratuity and pension and not paid as at when due.

“Section 124 of the constitution of the Federal Republic of Nigeria as amended, states those that at the categories of collecting pension and gratuity, definitely not lawmakers.

“Because you served for four or eight years and you want to take pension for life. What of those who served for 35,years,” the union said.

They,.however, appealed for the review of the law setting up the Revenue Mobilisations, Allocation and Fiscal Commission, RMAFC, to empower it to place all the political office holders including the President, Governors, Ministers, Federal and state lawmakers on the same salary scale with civil servants from Grade Level 18-25 in the country.

“This would save the country’s economy from collapsing and enable government to have more money to take care of the needs of the less privileged in the country.”

Also speaking, the National Deputy General Secretary of NUP, Chief Joseph Okunade said the national leadership of the Pensioners was in full support of the legal action against the state governors.

“We in the south west zone call for the inclusion of retirees in the new N30,000 minimum wage to be known as the National Minimum Pension.

“We advise governors who are grumbling over the payment of the new wage to shun frivolous spending to enable them meet workers and pensioners’ needs,” Okunade said.