Reacting in an exclusive interview with DAILY POST in Abuja, Senator Nwaoboshi described the allegations against him as wild and spurious.

Speaking through his aide, Mr. Luka Igbenoba, the lawmaker claimed that he was being subjected to a campaign of calumny because the Senate Committee on Niger Delta Affairs resisted Akpabio’s insistence on fraudulent contracts.

“You are aware of the controversy that has been happening in more than five weeks now in the Niger Delta Development Commission.

“Recently, there has been a campaign of calumny against the name and integrity of my principal, Senator Peter Nwaoboshi, Chairman of Senate Committee on Niger Delta Affairs.

“Even though all of them are lies, there is a need for us to clear the air on the matter because lies told many times has the capacity to become truthful.
“So, we will start by the campaign of calumny being sponsored by the Minister of Niger Delta Affairs, Godswill Akpabio against the person of Senator Nwaoboshi.

“What is happening now has a history and I like to take you people back to that time.
Factors that account for the sore relationship that exists between the two of them is that when Godswill Akpabio was made a Minister, he lobbied that the Niger Delta Development Commission (NDDC) be handed over to him.

“He wanted to be made the supervising Minister of Niger Delta Development Commission and you know it wasn’t like that in the eight Assembly; he got it.

“When he got it, he met $91 million, quote me emphatically; he met another N60 billion and the first thing he did, he awarded himself phoney and fraudulent contracts; contracts that never existed and you what I mean, clearing of hyacinths from water ways.

“He awarded these emergency contracts. To pay himself, he ordered that the $91 million be changed to Naira. Then the Acting MD then Mrs Enyia Legunma, an experienced civil servant and having worked in NDDC for a very long time, she knew that those contracts never existed, refused to change; she refused to give approval.

“She refused that the dollar be changed into Naira and an issue broke out between Akpabio and the woman. The issue leaked out to the National Assembly, especially the Senate Committee on Niger Delta Affairs.

“Akpabio came here seeking support of Senator Peter Nwaoboshi to convert the $91 million into Naira but Peter Nwaoboshi flatly refused. He refused because he knew that those contracts never existed.

“He promised him everything. He lobbied him, Peter Nwaoboshi declined, then Akpabio became furious. Peter Nwaoboshi insisted he was against fraudulent payment in NDDC. That is number one issue.

“The second factor was screening and confirmation of the NDDC board.

“The Chairman of IMC went ahead to lobby the Senate that the Board should not be screened and confirmed.

“Of course, the Senate Committee refused to listen and showed them a letter from Mr. President appealing to the Senate for screening and confirmation of NDDC board within one week.

“So, the crucial question is whose directive should the National Assembly follow? That of Buhari or that of Akpabio. There is no way the Senate Committee on NDDC would act without the express permission of the leadership of the Senate.

“Having lobbied and failed, the IMC too lobbied Senator Nwaoboshi; they lobbied the leadership of the Senate because they didn’t want to go, having known that if the nominees are screened and confirmed, their days are numbered.

“So if you aggregate Senator Nwaoboshi’s position, to cowtow, to bend rules and succumb to overtures of the Minister of Niger Delta, you discover that is the reason he has engaged in the campaign of calumny against Senator Peter Nwaoboshi.

“They feel frustrated; they are not happy and the only way they can fight back is to deceive Nigerians by mounting a campaign of calumny against Senator Nwaoboshi by saying those things that are not fathomable.

“And in 2018, the Committee didn’t attend to their budget, but those are lies. In 2017, there was budget, you all know that NDDC budget comes midstream into the year which does not come like other agency. It comes June/July of each year; there is 2018 budget which expires in July.

“The NDDC budget elapsed on 31st July this year and the joint Committee wrote them that they must not embark on extra budgetary expenditure and that they should submit their budget for approval.

“The letter was written during the former Acting Managing Director, Prof. Obasa, I have a copy of the letter which they acknowledged, so, the claim that there was no budget for 2017, and 2018 was a white lie.

“If you come to the office, you will see two copies of the budget, it is pure lies.
There was also the issue of 1,000 contract Akpabio said was given to Senator Nwaoboshi.

“The question one should ask is, how many contracts does NDDC give out in a year that they will give 1,000 to Peter Nwaoboshi? Not just a single one. When you make such a claim, you substantiate.

“The interim management Committee have records. They know those companies that were awarded contracts and if they want to find out ownership of the companies, they should go to the Corporate Affairs Commission.

“Look at those companies, look at their directors and tell me where you will see the name of Senator Peter Nwaoboshi.

“The truth is that let them stop deceiving Nigerians.

“One more thing that I want you to know is the claim that Senator Nwaoboshi was paid One billion Naira through a company as consultancy fee. This is another lie from the pit of hell. Not in the 8th Senate or the 9th Senate did Peter Nwaoboshi had such contract.

“Never did such a thing happen and if they are claiming that it happened, they know what to do. Throw the information to the Nigerian public, it is not enough to come on pages of newspapers and make wild allegations.

“What are they covering up? They are the keepers of records when it comes to NDDC and we are challenging them once more to go public if such a thing happened.” 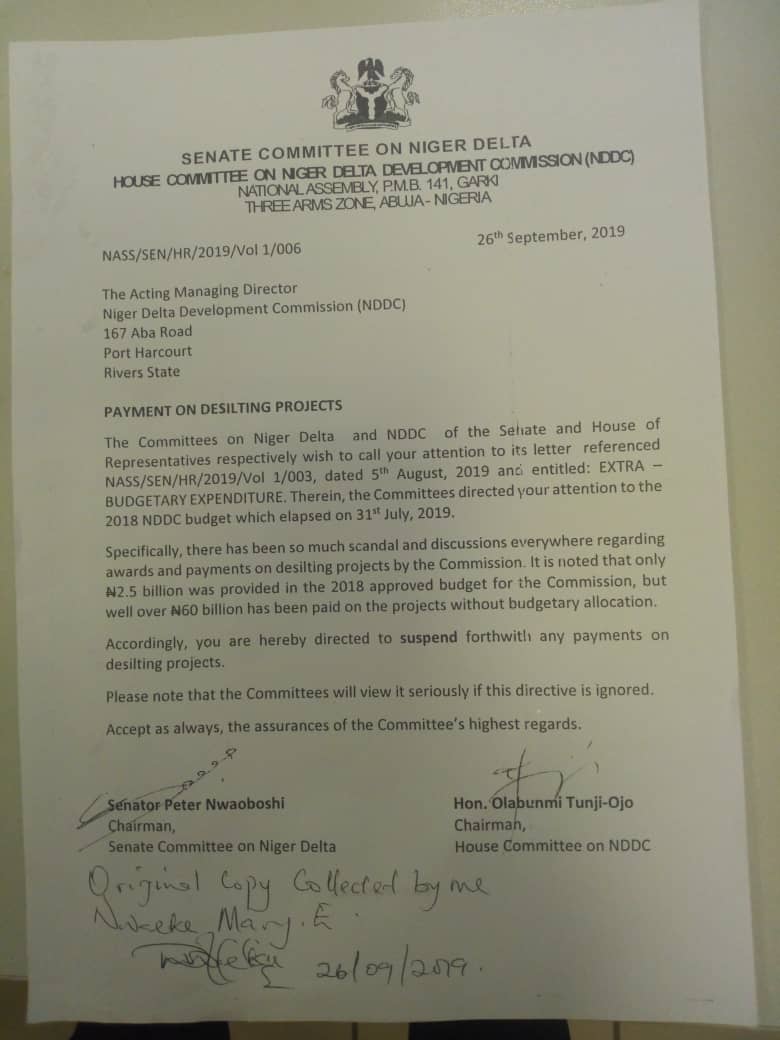