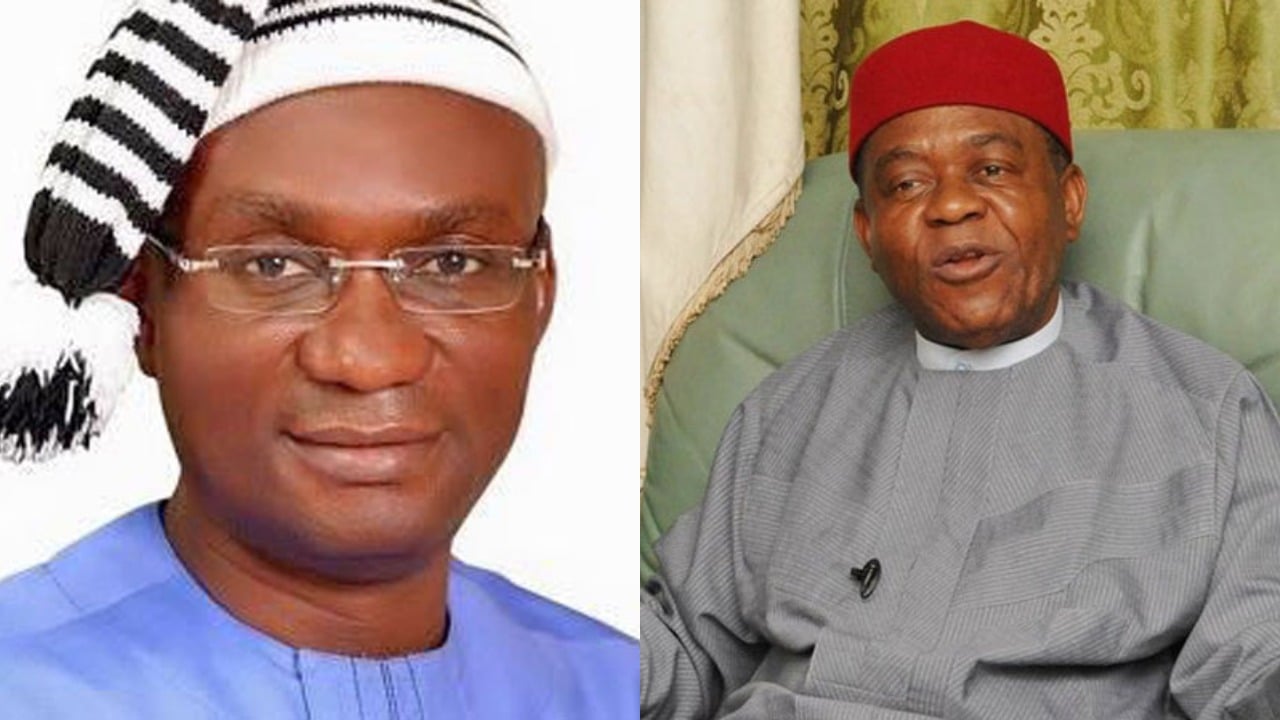 A leading socio-political organization in Abia State, Abia Unity Forum (AUF), has condemned what it calls the media trial of the Speaker of the State House of Assembly, Rt. Hon. Chinedum Enyinnaya Orji, and his father, the former Governor of Abia State, Senator T. A. Orji.

This was contained in a press statement signed by its President, Prince Paul Enyioma Okpanku, Esq, secretary, Barr. Chimereze P. Onuigbo and publicity secretary, Ambassador (Comrade) Chidiebere Kanu, and made available to DAILY POST on Monday.

The group described the blaze of publicity given to the allegations against the politician father and son as “elaborate attempt made to hoodwink the gullible into believing what more sober individuals have referred to as media trial without any substance.”

The group noted that since the allegation of looting of N525bn from Abia State coffers by Senator T.A. Orji, was published by some media outfits, common sense appears to have once more fled from people who ordinarily should know better.

“We think it is time to examine the facts and see how they stack up,” the AUF added.

“In July 2015, a group known as Save Abia Initiative forwarded a petition to the Economic and Financial Crimes Commission (EFCC) ostensibly to stop the inauguration of the former Governor of Abia State, Chief T. A. Orji, who was elected to the Senate to represent the good people of Abia Central Constituency on the basis that he allegedly looted all the N474bn revenue that accrued to the state government in the period between 2011 and 2015.

“As far as the petitioners were concerned, then immediate past Governor of Abia state did not pay one kobo as salary, did not construct any road or other infrastructure and, indeed, did not defray any cost associated with running the government for that period.

“The petitioners and, indeed, the recent report published by some sections of the media also sought to criminalize the collection and use of monthly security votes which they said was N500m per month for 48 months.

“This is the same security vote that the president and all 36 state governors still collect to date and which, for all intents and purposes, remain legal in Nigeria to date.

“Available records show that the Orji administration was collecting less than what at least 3 other south east state governors collected as security votes within the same period under review and just like in other cases, the funds were duly appropriated by the State House of Assembly.

“The investigation of this petition has been ongoing since 2015 and at all times the accused persons presented themselves to EFCC with documentary and other evidence to prove their innocence. No case has been filed in any court against them by EFCC.

“There is absolutely no former Governor or top politician in Nigeria today without an ongoing EFCC investigation. How the ongoing investigation of Senator Orji was deliberately isolated and manipulated for syndicated publication is clear evidence of political interference aimed at subjecting the targets to media trial only.

“The major company belonging to Rt Hon Chinedum Enyinnaya Orji has been in business since 2001. That was long before his father became Governor and unless we are now saying that whoever his father is a potential Governor should not own businesses in Nigeria then there is nothing to worry about.

“No single payment, through draft, transfer or cheque deposit, was ever made to the company account from Abia State Government or its contractors. The published petition did not state any such fund movement.

“The company also did not execute any government contract while the Speaker’s father was Governor of the state. Otherwise such evidence would have been presented along with the so called published investigation report.

“Most of the accounts listed as belonging to Engr Chinedum Orji are unknown to him and we make bold to state that the entries are FICTITIOUS. He does not have such funds anywhere in the world.

“One of the accounts listed as belonging to Rt Hon Chinedum Orji is actually his salary account opened in 2015 after he was duly elected as Member Representing Umuahia Central State Constituency in the Abia State House of Assembly.

“Whoever released the toxic fake account balances is obviously on a mission to demonize the Senator Orji and his family. For the accounts actually belonging to the Speaker, we noted that all the transactions in the account were apparently added up and declared as if they are current balances or the sum total of the alleged looted money from yet to be stated sources. If that is not mischief making, we wonder what it is.

“Other accounts listed have no link with either the Speaker or his father. We make bold to state that the balances listed against those accounts are FICTITIOUS.

“As for those calling for the resignation of the Speaker and the Distinguished Senator, they must be in league with those trying to demonize the family for political reasons. Otherwise, it is trite to state that every citizen is innocent until proven guilty by a LAW COURT, and that no action ought to be taken based on mere allegations.

“Some of the enablers of this malicious petition and media trial are also under investigation by the EFCC as records have shown.

“Similarly, the recently convicted Senator representing Abia North Constituency, Orji Uzor Kalu, was under criminal trial by a court when he got the ticket of the APC to run for the seat. Not even one of those now posturing in public complained or even whimpered in protest. Even after his conviction, he is yet to resign from office and the same people pushing the current resignation argument are yet to publicly ask him to resign.

“Neither Senator T. A. Orji nor Rt Hon Chinedum Enyinnaya Orji is on trial in any court in Nigeria, not to talk of being convicted. Is it the new normal in Nigeria that whoever is accused of any crime will have to resign his/her office to satisfy sore losing politicians and schemers?

“Recent history of Nigeria has confirmed that published petitions only serve to demonize victims in what is popularly called media trial. Dasuki, Deziani, Fayose etc are good examples. Interestingly, our checks suggests that EFCC did not actually release the report published by those media houses but merely confirmed the existence of ongoing investigation.

“Defeated Abia politicians should not be allowed to use contrived media trial of their opponents to overturn election results.

“Only a man who is bereft of common sense will believe that all the revenue made by an administration in 4 years ended up in the accounts of a private citizen who was not even in government as at that time.

“Those who published the petition being investigated are yet to provide any shred of evidence to indicate that Rt Hon Chinedum Orji or any of his authentic companies received a kobo from Abia State coffers while his father was Governor.

“The people responsible for this malfeasance are now sponsoring protests and media lynching to drive home a non existent point.

“The current toxic propaganda against Senator Orji’s family is being sponsored from Abia State by known individuals who continue to fret over the possibility that Speaker Orji might harbor future governorship ambitions.

“To them, his public declaration that it is morally wrong for him to seek the number one position in Abia State in 2023 is not enough. He must be pulled down and destroyed at all cost including conspiring to publish a petition that EFCC is still investigating while passing it off to the gullible as a concluded investigation.”

Okezie Ikpeazu, the Governor of Abia State, has directed the compulsory retirement of the Executive Secretary of Secondary Education Management Board, SEMB, Lawrence Ogbonna, with

The Federal University of Technology, Akure, FUTA, has slammed an indefinite suspension on a final year student of the institution who hacked into the website

Ekiti State Governor, Dr Kayode Fayemi, on Wednesday during a state broadcast said that only students in SS3 classes would resume revision classes on August

Kindly Share This Story:Governor Seyi Makinde By Ola Ajayi, Ibadan Oyo State Government has approved the sum of N59.7m as grants for the take-off of the State