Borussia Dortmund star, Jadon Sancho, on Sunday shunned celebrating his first goal against Paderborn in the Bundesliga by making a statement over the killing of an American, George Floyd, by a police officer in the United States last week.

Sancho found the net to put Dortmund 2-0 in front against Paderborn at the Benteler Arena and ran to the corner flag before removing his shirt to disclose a message on his base layer that read: “Justice for George Floyd.”

The 20-year-old was later shown a yellow card for removing his shirt. 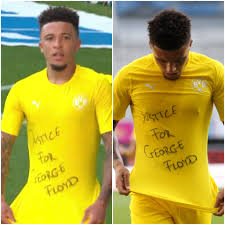 The England international scored a hat-trick against Paderborn.

Sancho was making his first start for Dortmund since the German Bundesliga resumed post-COVID-19 three weeks ago.

Sancho has recently been linked with a move to Premier League giants, Chelsea, Manchester United, and Liverpool this summer’s transfer window.