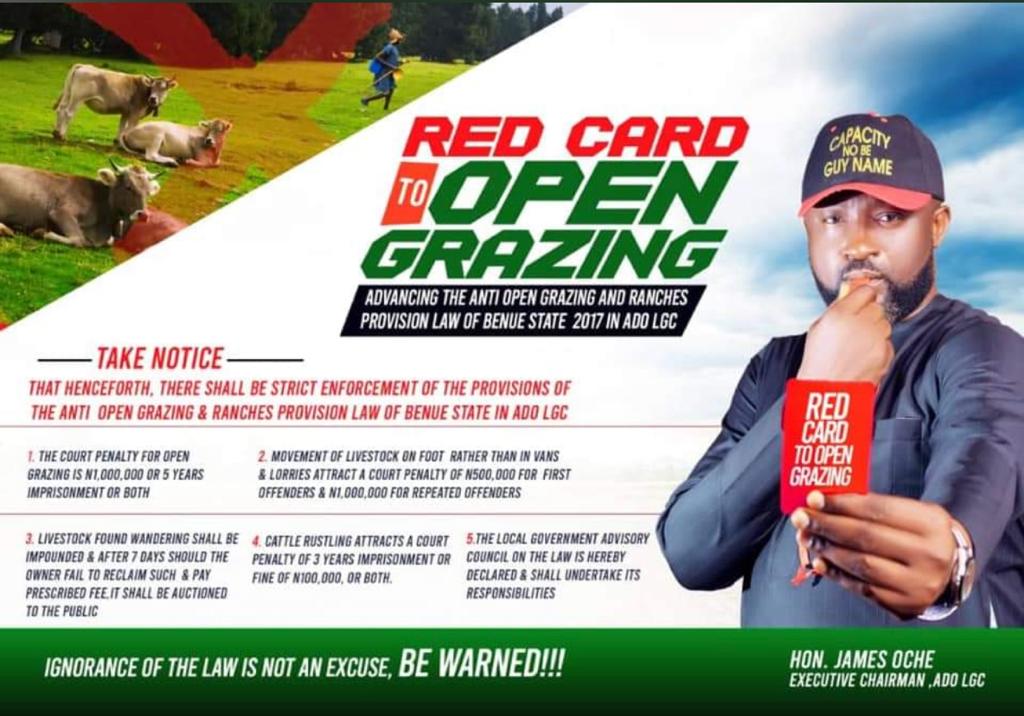 Determined to eradicate crime from Ado Local Government, the Executive Chairman, James Oche has, after a crucial meeting of the Local Government’s Security Council issued a red flag to criminals that are terrorizing the area.

The council boss also said the anti-open grazing law of the state will be implemented to the latter in Ado.

Oche stated this after a crucial meeting of the Local Government’s Security Council.

The meeting had in attendance representatives of security agencies, top traditional rulers and selected critical stakeholders who all gave a nod to the disposition of the chairman to combat crime and enforce the provisions of the open grazing prohibition law of Benue State headlong within his domain.

In a statement by the Information Officer of Ado Local Government, Samuel Ogbu, Oche further spelt out some of the punishment sections of the law, which tagged the penalty for open grazing to be five years imprisonment and or one million Naira fine, penalty for foot movement of livestock as five hundred thousand Naira for first offenders and One million for repeated offenders while livestock grazing indiscriminately would be impounded and after seven days would be auctioned among others.

He stated further that, the menace occasioned by the nefarious activities of some herders and owners of livestock against farmers and the people would no longer be condoned and expressed the willingness of his administration to enforce to the latter, the provisions of the law against open grazing. He enjoined all citizens of Ado to keep their livestock within ranches or bear the weight of the law.

Oche said, there would be a grace period of two weeks with effect from Tuesday, July 7, 2020, to allow those who contemplated within their consciences and decided to denounce crime to surrender up their arms at the office of the operation Whirl stroke in Igumale and be engaged meaningfully by the local government in a choice trade or empowered to do agriculture as well as financial recompense to pursue civil life.

He assured that those who utilized this opportunity will not be subjected to any further action by security agencies and would rather be protected but said those who would not hearken to the call for voluntary submission of arms should be prepared for the ensuing war against crime.