With nine days to the governorship primaries of the People’s Democratic Party, PDP, in Ondo State, the party is currently enmeshed in crisis.

Some members of the Party on Monday thronged the party’s secretariat in Alagbaka, Akure, the state capital accusing the leadership of the party of manipulating the delegates’ list ahead of the July 22, 2020 primaries of the party. 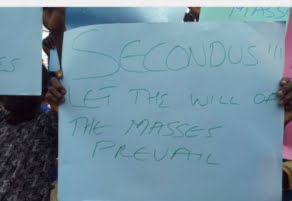 The protesters were armed with placards at the gate of the secretariat bearing various inscription such as, “Secondus, let the will of the masses prevail”, “Chinda’s doctored delegates list will not stand”, “Don’t set Ondo ablaze, respect masses opinion,” “Don’t cause trouble in Ondo State”, “Don’t sell our rights” among others. 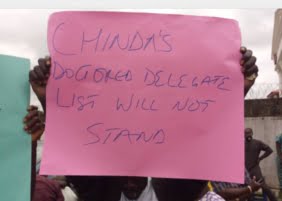 While calling on the national leadership of the PDP to reverse the purported insertion of names into the delegates’ list, the protesters stated that the alleged plan to favour a particular aspirant will be resisted.

According to findings, the other aspirants had alleged that the Deputy Governor of Ondo State, Agboola Ajayi who defected to the PDP recently from APC was responsible for the insertion of fictitious names into the delegates’ list.

The protesters also accused the caretaker chairman of the party in the state, Clement Faboyede of his involvement in the alleged manipulation.

Reacting to the allegation, Faboyede insisted that he knows nothing about it as he advised the aggrieved aspirants to put up a written petition which would be forwarded to the national leadership of the party.

Faboyede said “The leadership of the party wishes to assure all aspirants that the processes for ensuring free, fair contest are still in place and would not be subverted.

“The list of valid delegates would be made available to all the aspirants after it has been duly compiled. We appeal for calm as the matter as referenced above remains unsubstantiated.”

Also, the deputy governor had described the allegations as false as well as an attempt to blackmail the leadership of the party.

Ajayi who spoke through his Chief Press Secretary, Babatope Okeowo said that the allegation was being sponsored in order to pull his boss down at all cost.