Davido made the claim while absolving End SARS protesters of involvement in the attacks.

The singer pointed out that no amount of mischief would stop the protest against police brutality and bad governance.

Davido made the remark while condemning the attack on two Correctional Centres in Benin City, Edo State.

The hoodlums had attacked the facilities and freed some inmates.

Reacting, the singer in a series of tweets wrote: “After seeing all that’s gone on today I just want to say that from the beginning we have preached that the protest must remain peaceful and Law Abiding and as far as I know we have kept to that! And we will continue to keep to that so the narrative can NOT be switched up on us!

“The people they claim broke into prisons to free convicted criminals, burn police stations to steal weapons, damage police, government, and private vehicles are Criminals and everybody must condemn these acts. They are not part of our movement !

“#EndSars is a peaceful and law abiding protest that is going somewhere great! And no mischief can scatter it!” 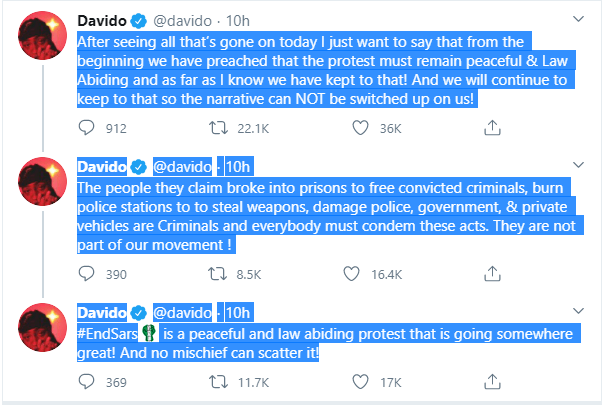 Motorcyclists clash with warders over parking space in Ibadan