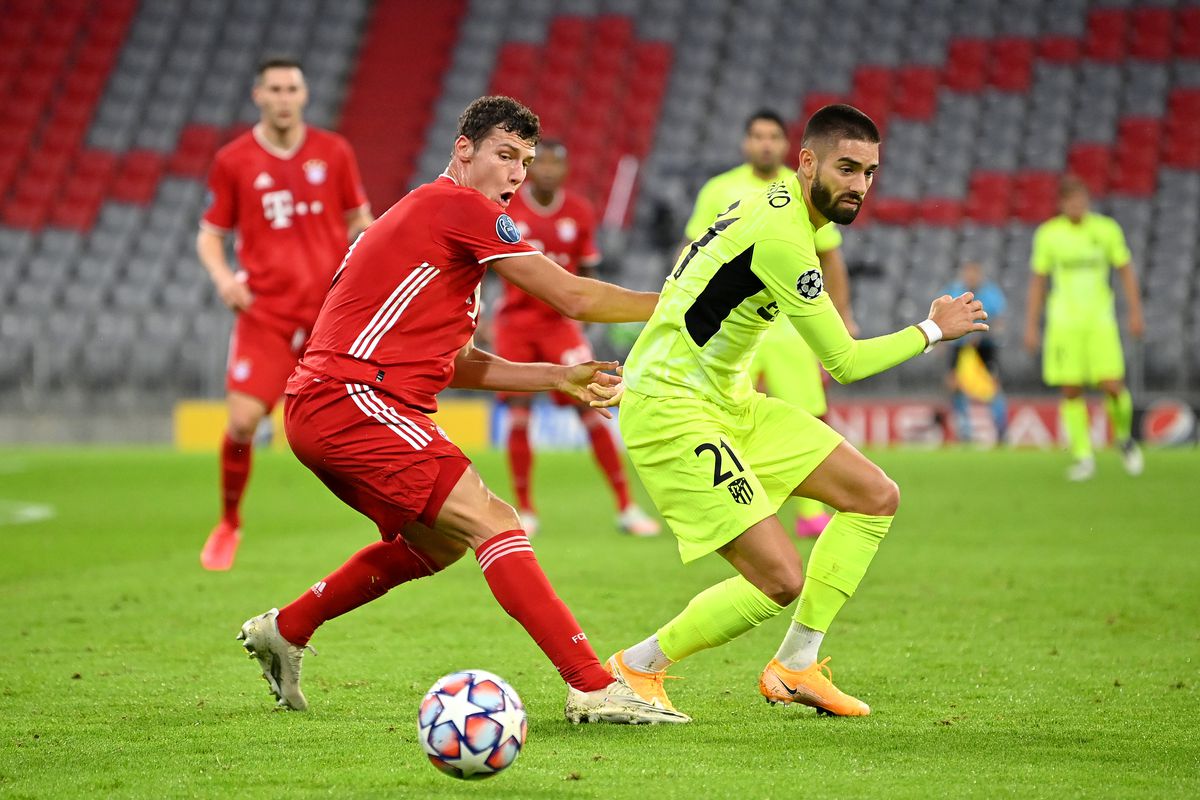 The Bavarians giants began their UEFA Champions League campaign as they were in top form against Atletico Madrid.

They mauled Diego Simeone’s men at the big stage with four goals to nothing as the Spanish side couldn’t handle the threat coming from the Bayern side, to say the least.

It promised to be one of the standout encounters in the Match Day 1 fixture on Wednesday alongside Ajax vs. Liverpool and Manchester City vs. FC Porto.

And it lived up to its billing as goals were going in like water coming from the rock (waterfall).

The Bavarian giants overpowered the Spanish side at the Allianz Arena with their intense playing incision in the final third.

It proved decisive as it saw goals from Kingsley Coman, Leon Goretzka and Corentin Tolisso sealing the win for Bayern Munich at home.

Bayern had 5 shots compared to only 1 strike Atletico Madrid managed in the game.

Bayern’s dominant display also reflected in the shots off target statistics during the course of the game.

The intriguing contest witnessed Atletico Madrid playing second fiddle to the Bundesliga giants Bayern Munich for much of the contest.

Despite having former Barcelona lead the lines for them they couldn’t find a goal in the UEFA Champions League.

The Bayern side’s dominance stemmed from the quality they’ve got in the midfield as goals were easy to come by for them against Diego Simeone’s man.

Despite having Koke and Joao Felix in the middle of the park, they couldn’t match the Champions’ midfield antecedents as they controlled the match to their own advantage.

The Athletico side did the little they could to pull together 7 corners while Bayern Munich had 6 corner-kicks.

This was despite the Germans attacking influx in the final third of the pitch.

It was not to be Athletico’s night like they had against Liverpool as their goal was ruled out for offside in the second period of the game.

Bayern Munich’s superiority was evident as they coordinated themselves to perfection against the Spaniards.

But Simeone’s men would fall short of this feat as they lost their cool and team coordination following the high pressing game exhibited by the German giants.

This led to them conceding 5 offside as regards to the one offside Bayern had at the entire duration of the match.

The game cumulated about 8+13-21 fouls in the entire match as expected following the intense responsibility that the match had to offer in general.

Bayern committed 7 fouls as compared to Athletico’s 13 fouls as frustration began to grow in the camp of Diego Simeone’s side in the Wednesday clash.

With the number of fouls committed in the match, a couple of bookings were ideal as Bayern and Atletico Madrid got cushioned in the game as the case may be.

The two of David Alaba and Thomas Muller got into the referees booking in the 5th and 21st minutes respectively.

Here, the number of goalkeeping saves were far-fetched as both sides missed a couple of chances in the duel.

Bayern was very much clinical in the final third unlike Atletico Madrid that lacked the cutting edge to have a say against the Bayern’s back four.

In the end, both goalies had to settle with only one goalkeeping save apiece.

The number of goal-kicks experienced in this tie highlighted the intense nature of the contest as both sides sought to prove a point in the UEFA Champions League cracker.

It was Bayern that got the better of their Spanish opposition with 10 goal-kicks in the encounter thus showing their overall superiority in the contest.

The German giants were calculative in most of their physical duels as they ensured they had no dealing with treatment issues.

While Simone’s men entered into every challenge with an iota of desperation.

And it proved the reason why they had 1 treatment to handle in the game.

Escape to Niger: Maina to remain in prison until end of trial