Manchester United midfielder, Paul Pogba, has debunked the news that he has quit the France national team.

Macron’s comments came amid the beheading of a French teacher, Samuel Paty, who was murdered on his way home from the junior high school he taught in Conflans-Sainte-Honorine – some 40 kilometres northwest of Paris.

The French government conferred the country’s highest honour, the French Legion d’honneur, on Paty, 47, who had shown images of the prophet Muhammad to schoolchildren before the attack.

Macron described the killing of Paty as an “Islamic terrorist attack” and also said that: “Unity and firmness are the only answers to the monstrosity of Islamist terrorism.”

Pogba, who converted to Islam a few years ago, was said to have quit from France’s national team after Macron’s comments.

However, the 27-year-old has now denied the reports he resigned from international duty, labelling the story as “unacceptable fake news”.

The former Juventus star posted a picture of the report on his Instagram account on Monday with a stamp saying, “unacceptable fake news”.

He later added a full statement, confirming he would be taking legal action. 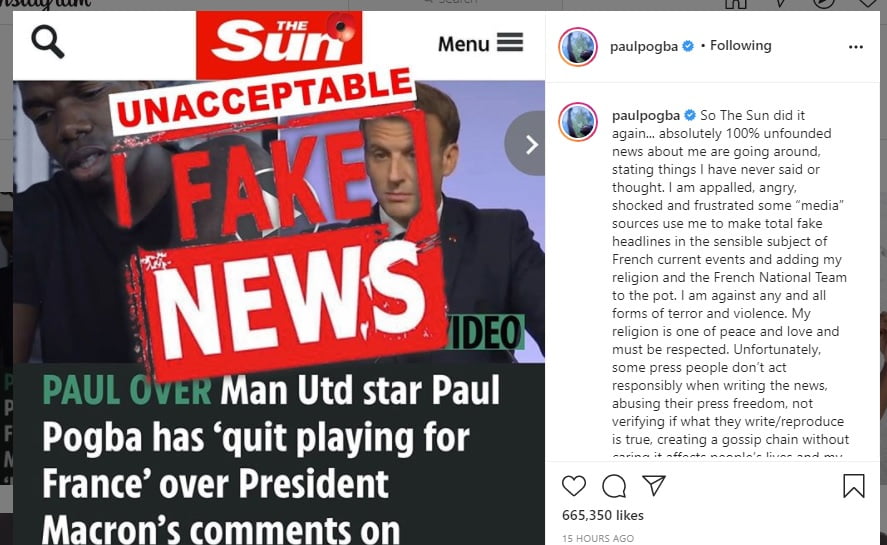