She made the announcement on Twitter 24, hours after the Democrat entered the White House.

The Republican congresswoman has ties to QAnon. The staunch supporter of former President Donald Trump was vocal about the November 3 election fraud conspiracy theory.

“I’ve just filed articles of impeachment on President Joe Biden, we will see how this goes”, Greene said in a video.

In a statement, she insisted that the American leader is unfit to hold the office.

Greene noted that his pattern of abuse of power as Barack Obama’s vice “is lengthy and disturbing”.

She alleged Biden has “demonstrated that he will do whatever it takes to bail out his son, Hunter, and line his family’s pockets with cash from corrupt foreign energy companies”.

Greene said the former VP was on tape, “admitting to a quid pro quo with the Ukranian government threatening to withhold $1billion in aid if they did not do his bidding”.

“President Biden residing in the White House is a threat to national security and must he be immediately impeached”, the lawmaker declared.

The Republican claimed that people were told not to go and that flags were planted to show the fake support.

“Yesterday’s inauguration looked like a one party military state takeover with 30K troops. Biden calls for unity after the Dem party has attacked & continues to attack anyone that disagrees with them,” she said.

Greene has also been accused of posting false conspiracy theories on Facebook about the Parkland High School shooting in February 2018.

The congresswoman has been consistent in her allegations of corruption against Biden and his family in China, Russia and Ukraine.

In 2020, a Senate investigation found no evidence of corruption against the President nor his son, Hunter.

On January 18, Greene hinted at her plan to file the articles of impeachment.

“I’ll be introducing Articles of Impeachment against President-elect @JoeBiden due to his abuses of power as Vice President. Americans can’t have a President who has threatened foreign governments to remove government officials. #ImpeachBiden”, she tweeted.

Video of her announcement on Thursday has racked up millions of views and tens of thousands of comments and retweets. 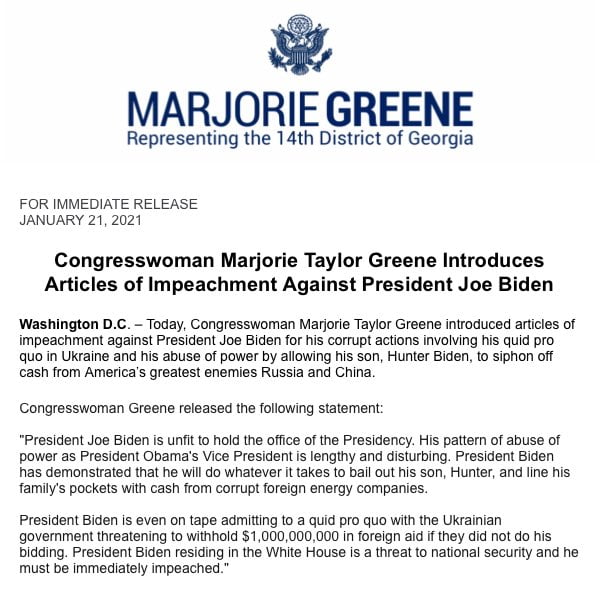 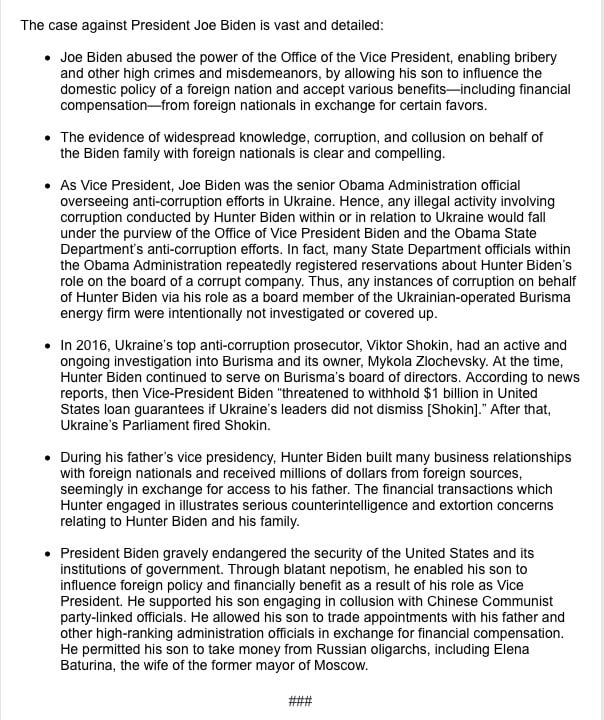