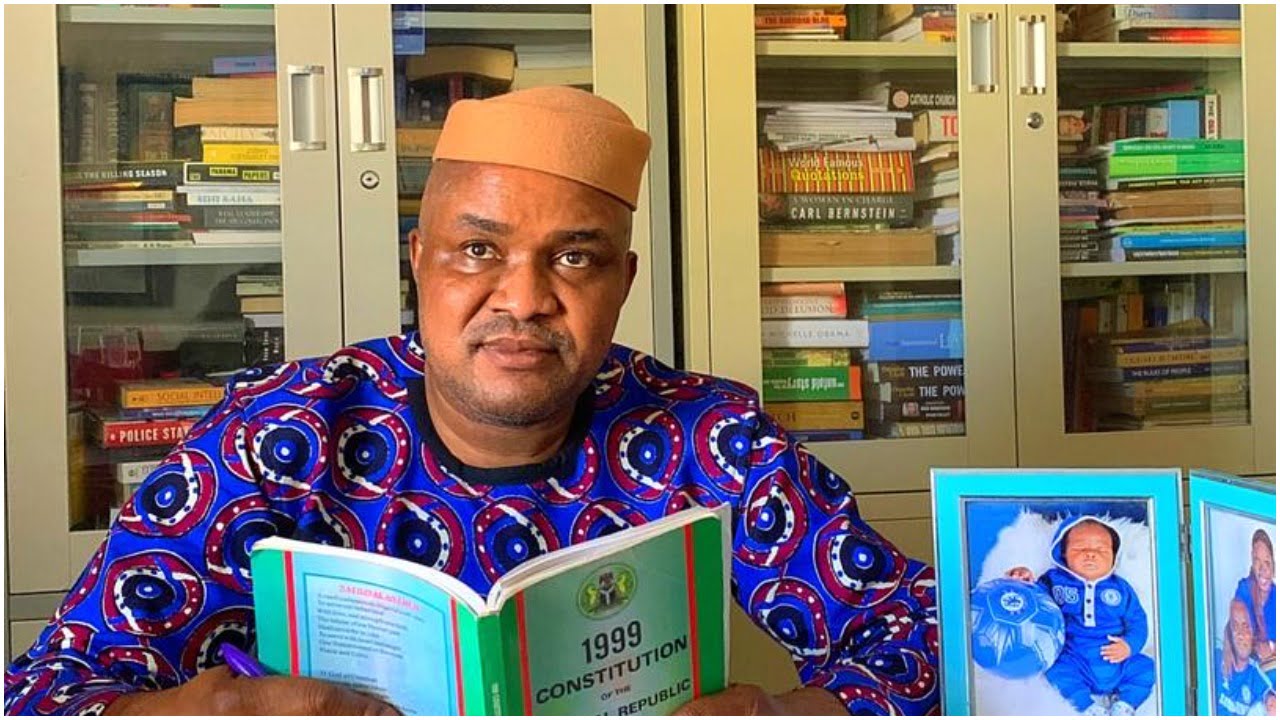 “It is a glaring fact that Northerners occupy over 80 percent of Nigeria’s population and that is primarily why other minority tribes like Igbo and Yoruba should respect them for that. The insecurity everybody is talking about is everywhere. Before Nigerians particularly Igbos and Yorubas used to think that insecurity existed only in the North but today, insecurity in those tribes today is on the increase. Igbos and Yorubas are busy agitating for freedom, thereby creating their own insecurity with the establishment of IPOB and Oduduwa Republic which are now terrorizing the entire nation. My advice to every Nigerian is to support President Muhammadu Buhari in moving this country forward. He has achieved so much for the country and must be commended” – Governor Abdullahi Ganduje.

This is one of the most shameful, insulting, specious, irresponsible, pernicious, perfidious and disrespectful statements that I have heard in years. It is also reflective of the author’s debilitating, deafening, gut-wrenching and mind-blowing ignorance.

Governor Ganduje is nothing but a decrepit old relic from the distant past and a fading and toothless old dinosaur who has not only lost touch with reality but who has also lost touch with common sense. Simply put he is either totally and completely insane or he is suffering from strong delusions of grandeur.

To him Southerners are like the Lilliputians from Gulliver’s Travels that are little better than field hands, slaves and serfs whilst Northerners are the “master race” who “own Nigeria” and who are “born to rule”.

Yet to Southerners he and the tiny group of little monkeys and excitable chimpanzees that think like him are nothing but a vulgar, primitive and crass dying breed of vandals, vagabonds, barbarians, bozals and lazy thinkers who believe that the shedding of human blood, brute force, conquest and violence is the answer to everything and who have no culture, no history, no heritage, no decency and no humanity.

Thankfully he does not represent anyone in the North but himself and this small handful of irritants and primitive thinkers and even more thankfully few of those that think like him still remain on the earthly plain. He says Northerners own Nigeria and that they constitute 80% of the Nigerian people! Permit me to ask, which “North” is he talking about?

Is it the North West, the North East or the Middle Belt because these are three distinct and separate entities which are all manned and filled with people from different tribes and religious faiths. The old North that Ganduje craves for and appears to be trying to invoke and resurrect is long gone, dead and buried.

For the last few weeks and months I have been at the forefront of those advocating for the building of bridges and understanding between the regions, zones, tribes, religious faiths and political parties in Nigeria. However, statements like Ganduje’s make this appear to be an exercise in futility.

That we want to keep the peace, build bridges, enhance national unity, re-establish national cohesion and ensure that our country does not end up fighting a second civil war or engage in a second round of fratricidal butchery does not mean that we are weak, cowardly, scared, perturbed or living in trepidation of the North and neither does it mean that we have lost our testicular fortitude and capitulated to the archaic, anachronistic, godless and unacceptable philosophy and irreverent logic of ‘born to rule’.

It just means we are decent, civilised, restrained, mature and responsible leaders and people who hate bloodshed, who value peace, who seek to avoid conflict, who insist on ensuring that good sense prevails and who recognise the fact that war is the greatest evil that one can possibly imagine and that we must avoid it at all costs.

Despite our pacifist disposition it must also be clearly understood that there is a limit to our sense of restraint, patience and understanding and that limit is a clear understanding and acknowledgement of the fact that peace cannot come at the expense of Southern and Middle Belt liberty, dignity, self-respect, freedom and pride. Simply put we will not sacrifice our civil liberties, human rights and right to exist as freeborn citizens on the altar of one Nigeria.

It is either that Nigeria regards us as equals before God and the law and as freeborn and independent citizens or to hell with her and her much-touted, vainglorious and illusionary unity which cannot possibly be sustained into the distant future without making the necessary changes, sacrifices and concessions.

The slightest suggestion or suspicion that Southerners and Middle Belters are slaves, are a minority or are second class citizens in this country will deafen the ears and silence the tongues of even the moderates in our ranks and ultimately result in a brutal, violent and protracted conflict in which millions of people on both sides of the regional divide will die.

This is the sad and bitter truth and I see it coming so clearly unless we work hard to avoid it. This is why we need to be careful what we say and do these days because tempers are running high and the lid is about to blow off. In the South particularly people are just fed up and are no longer prepared to be restrained or reasonable.

They believe that they are under siege and they are facing an existential threat from hordes of barbarous, bloodthirsty and savage terrorists from outside our shores who seek to steal, kill and destroy and whose sole objective is to establish a permanent army of occupation and colonise the entire region.

Those of us that have been appealing to them to be restrained and not to perceive every Hausa Fulani person as an enemy are having a very hard time indeed and are more often than not viewed with suspicion and described as collaborators.

Whilst we are not deterred or concerned about such erroneous and absurd characteristics which are clearly not rooted in truth any further provocation may have the effect of setting aside reason and rationality and ultimately result in the eruption of a massive cauldron of fire and the release of death, destruction and the dogs of war.

Governor Ganduje has stoked the fire, increased the temperature, shaken the fragile table and added to the palpable tension that already exists in the nation by articulating his self-serving and nonsensical diatribe and his words have proved to be not only irresponsible but also utterly reprehensible. Worse still this is the second attack by a prominent northern leader on Southerners in the last one week and this has not gone unnoticed in many quarters.

Is it all being orchestrated in order to push the South to the brink or bully us into submission? I really do wonder but if that is the idea it will not work. As a matter of fact it will have the opposite effect and it will provoke us to rise up to the occasion, pick up the gauntlet and resist the attempt to silence, subjugate and intimidate us.

Let me serve notice to Governor Ganduje and all those that think like him. If you continue to talk like this we will not attempt to build that bridge of peace anymore but rather we will burn it and damn the consequences.

Everyday we receive insults from our own people in the South and Middle Belt for not going on the offensive and for urging them to remain calm and sheath their swords. Instead of respecting and reciprocating our efforts Ganduje and a few others in the North are provoking our people all the more with their nonsensical, puerile and infantile statements.

We worked with some prominent and responsible northerner and Middle Belt leaders, like Governor Yahaya Bello of Kogi state and Comrade Awwal Abdullahi of the Northern Consensus Movement, just a few weeks ago during the food embargo against the South and together we ensured that our country pulled back from the brink and did not end up in war.

That was a great achievement and it proved that if we all choose to be reasonable, treat each other with respect and work together we can make things work in Nigeria and get rid of these divisions. As a consequence of those efforts and the patriotic stance of many of the stakeholders that were involved in the discussions and negotiations, lives were saved and we found a way forward. And the fact that President Buhari directed, backed and commended that effort says a lot for him.

Governor Ganduje and those that share his primitive and antediluvian mindset should not spoil all that good work by insulting Southerners and compelling us to go back to the trenches. If he does both he and those that think like him do will ultimately regret it deeply.

The South is NOT occupied territory, she is NOT conquered land and she is NOT your vassal state. Southerners are NOT slaves, Nigeria is not owned by Northerners and neither can Southerners or Middle Belters be treated with levity, contempt and disdain any longer.

The Igbo and the Yoruba in particular will be your worst nightmare if you continue to call us out, push us to the wall, insult us with reckless abandon, kill our people or spit in our faces. I advise you and those that think like you to mind your words or prepare for a cataclysmic and jaw-breaking response and reaction which may ignite our country into the greatest display of lethal fireworks in the history of Africa.

I also advise you to borrow a leaf from the millions of Northerners and the new generation of respectable and responsible northern leaders, like Shettima Yerima and Nastura Ashir Sharif, who do not share your shameful views and who see themselves as equal partners with their counterparts from the South.

We can be friends and brothers and we can work together to enhance national unity and better the collective future of our people but there is one condition: the South will NEVER be your slaves. Rather than that we will go our separate ways.