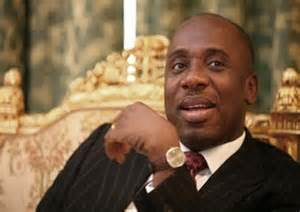 “Monorail Belongs To Rivers State, Not Amaechi”. This is a press statement released by RT. Hon. Chibuike Rotimi Amaechi media office for the Gov. of Rivers state.
We watched with disgust and disbelief the recent television interview of Rivers State Governor Nyesom Wike, excerpts of which had also been used in some newspapers.
It was the typical Wike, twisting, butchering and turning the truth upside down; and in most cases telling outright deceptive lies in his failed bid to denigrate, tarnish and rubbish the towering image, person and laudable, landmark achievements of his predecessor and now Minister of Transportation, Rt. Hon. Chibuike Rotimi Amaechi.
Most troubling, was Wike’s propensity, without any qualms whatsoever, to play politics with the safety and security of the lives of Rivers people. This is indeed most worrisome. It is no secret that Wike plays politics with development, the welfare and well-being of Rivers people. But no government should play politics with the safety and security of its citizens like Wike is sadly and shamelessly doing.

Governor Wike claimed that the brutal political killings and murder of the All Progressives Congress (APC) members and other hapless citizens in the State are cult related or a result of cult clashes. What cult wars is he talking about? Since he claimed to have security reports, we challenge Wike to tell Rivers people the cult group that Franklin Obi, the APC Ward chairman in Omoku, belongs to, that led to his being gruesomely, beheaded and butchered, alongside his pregnant wife and teenage son. Or did Franklin suddenly became a cult member because he had the guts and courage to host a resoundingly successful ward meeting of APC faithfuls in the same ward as Wike’s Peoples Democratic Party (PDP) State chairman, Felix Obuah, just a few days to the re-run elections?

We challenge Wike to tell us the cult groups and the cult wars that led to the killing of the innocent youth corper, Chukwudumeibi Okonta on the re-run Election Day? Was the Youth Corper a cultist or victim of cult wars or yet another victim of politically motivated killings in Rivers State? Wike must tell Rivers people the cult wars that led to the brutal murder of hundreds of Rivers people since the so-called election that made him governor, and the cult groups that all those that have been murdered, belong to.  Wike’s cult wars/cultists claim is akin to insulting and spitting on the graves and memories of all those murdered and their families.

With pity, we watched as Wike tried to compare the political killing of the late Okonta and INEC adhoc staff on the rerun  election day in Rivers State to the fire accident that occurred at the home of the INEC Resident Electoral Commissioner  in Kano State days after the elections of 2015. How pathetic. Even for Wike, this is a new low.

On the Rivers Monorail project, Governor Wike said that he will not touch Amaechi’s monorail and that the entire state has told him not to continue with the project. Can someone please tell Wike that the monorail belongs to Rivers State and it’s not Amaechi’s private monorail? Pray, Governor Wike, which Rivers people told you not to touch the monorail project? Is it the same Rivers people that have consistently praised the project and see it as a catalyst to jump-start the local economy and place the state at the forefront of transport infrastructural development in Africa? Or is Wike aggregating the jaundiced views of the coterie of court-jesters that hang around him daily, as the opinion of the entire people of the State? It is sad, very sad that Wike has elected to play politics with this laudable project that was almost completed before Amaechi left office.

Governor Wike also described several ongoing projects in the State when Amaechi left office as ‘abandoned projects’ that he claimed to have completed or about to complete. He specifically mentioned the Ogoni-Andoni-Opobo Unity road that connects the Island of Opobo to Andoni and the rest of the State.  What a shameless lie! This project was ongoing and was almost completed as at May 29, 2015. May we also remind Wike that the Eagle Island- Diobu road that he once claimed to have been abandoned was 90 percent completed with just the final course of coal tar remaining as at when he succeeded Amaechi.

It’s repudiating that Wike would even attempt to rubbish and destroy the laudable projects and achievements Amaechi made in the health and educational sectors as governor. Shamefully, what has happened in the past months since Wike became governor is that Wike has neglected the model schools and health facilities built by Amaechi and have allowed them to rot away, taken over by weeds and grasses, in tandem with his policy of not wanting to touch Amaechi’s projects or build on Amaechi’s enduring legacies. Governor Wike, these projects belong to Rivers State and its people, not Amaechi.