Laws should not restrict freedom of worship - Osinbajo 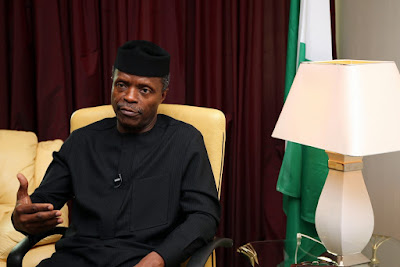 Vice President Yemi Osinbajo has said that laws should not be made to restrict the freedom of worship in the country. Osinbajo said this in a keynote address at the “First National Judicial Roundtable on The Intersection between Law and Religion’’ at the National Judicial Institute, Abuja on Monday.

The vice president insisted that in a situation where the laws were made in line with provisions of the Nigerian Constitution, such laws must be “reasonably justifiable’’.

He averred that the protection of freedom of worship and the practice of one’s beliefs was crucial especially in a democratic society. “Those laws according to the Nigerian Constitution where they restrict freedom of worship, must be “reasonably justifiable” in a democratic society in the interest of defence, public safety, public order, public morality or public health.

“Or for the purpose of protecting the rights and freedom or other persons. “It is this test that restrictive laws should satisfy every law that seeks to restrict religious freedom, that is, is this legislation reasonably justifiable in a democratic society for the protection of one of the listed public goods? “The crucial question with respect to such laws is whether they should be allowed to exercise prior-restraint?

“For example should there be licensing of places of worship or the dissemination of religious information? “Or should the laws punish offending conduct when it occurs, such as the dissemination of hate speech? “Is it reasonably justifiable in a democratic society to make laws that restrict freedom of speech by the fact that it says you must seek permission before you can make certain types of public utterances?’’ Osinbajo noted that prior-restraint “is open to abuse, will unduly restrict freedom of worship and is probably unconstitutional’’.

He acknowledged that freedom of speech is not only a fundamental right (in its own right) but it is also the vehicle for the realisation of other rights. He, however, said that the laws must however be enforced to punish offensive conduct such as the dissemination of hate speech or the perpetration of unlawful acts under the guise of religious beliefs. The vice president emphasised that courts must be more careful to maintain their neutrality in the trial of such matters.

Osinbajo said that there was the need to deal with violent extremism emanating from religion. He said the ideology of violent extremism such as that perpetrated by Boko Haram or ISIL rejects the common basis for human interaction under domestic laws of most societies and international law. “The extremists reject the inalienable freedoms and rights of others, they reject the known universal mechanisms for negotiation, compromise, and resolution of differences. “They seek to impose their world-view by force of terror on others. “Consequently there is no reasoning with these groups.

“The rest of society who reject this bloodthirsty approach to spreading a set of beliefs must be prepared to sustain a war against extremism which must lead to the military defeat of its forces but more importantly victory in the ideological battle.’’ Osinbajo said there is no question at all that there are important intersections between law as an instrument of social control and religion especially in so far as it tends to define moral parameters and borders.

The Administrator of NJI, Justice Roseline Bozimo, represented by the Institute’s Secretary, Mal. Abubakar Maidama, said the roundtable was aimed at forging harmony and eliminating religious extremism. She said religion ought to be used as a tool for promotion of societal development rather than violence adding that both religion and law established standards for development.

The Chief Justice of Nigeria, Justice Mahmud Mohammed, represented by Justice Kudirat Kekere-Ekun, noted that there was great relationship between religion and law as most legal systems drew from religious practice. He said the topic was one that would ensure the peace in the country and pledged the commitment of the judiciary to ensure its success.