'Stop BREXIT, we want to remain in EU - Londoners protest 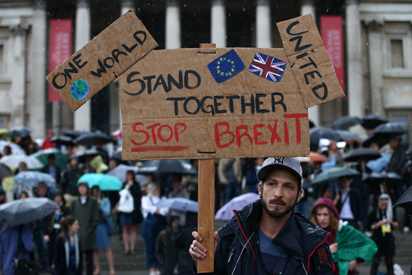 Waving European Union flags and chanting “no Brexit”, thousands gathered under pouring rain in central London on Tuesday to express their anger and opposition to Britain’s vote to leave the EU.

There was a sense of anger as the crowds gathered in Trafalgar Square before marching towards parliament, urging lawmakers to block the 52 percent vote in favour of Brexit with chants of “do your job, vote it down!”

Britain has been pitched into uncertainty by the June 23 referendum result, with the economy suffering a string of shocks and Scotland raising the prospect of breaking away to become independent.

Carolyn Berry, a 53-year-old teacher, said she was rattled by the political chaos, which saw Prime Minister David Cameron resign and a revolt in the opposition Labour party to oust its leader Jeremy Corbyn. “I’m very sad about the result and wanted to express my sadness and anger,” Berry said. “It’s like one disaster after another.

There is no government, the opposition is imploding, it’s scary. The crowd held signs including “We are Europe”, “Stay” and “Stand together, stop Brexit”. The protesters also made their anger at pro-Brexit politicians clear, after some Leave campaigners appeared to row back on promises made during the campaign to cut immigration and spend more on health.

“Liars, liars!” the booing crowds shouted outside parliament. Other demonstrators expressed fears of a rise in racist incidents since the vote. “I’m born and raised in England but because of how I look I have been told on Monday to go home,” said 28-year-old teacher Clare Johnson, who has Mediterranean features.

“As a British person to experience that is scary.” A string of rallies had been organised in cities around Britain but many were cancelled after too many people indicated they would attend, leading to fears over crowd safety.

The London protest was cancelled by its organisers, but the crowds turned up regardless. UK Independence Party leader Nigel Farage was targeted with chants of “Fromage (cheese), not Farage!” The crowd also chanted curses about former London mayor Boris Johnson, tipped as a possible successor to Cameron as prime minister. The vote to leave the EU was deeply split, with Scotland, Northern Ireland, university cities and the capital London voting to remain. But the vote to leave the EU was carried by deep opposition to the European bloc in less affluent areas of England and Wales. The result went against polling data and betting markets and deeply shocked many in favour of remaining one of the bloc’s 28 member states.

An online petition to hold a second referendum on the result has gathered four million signatures.