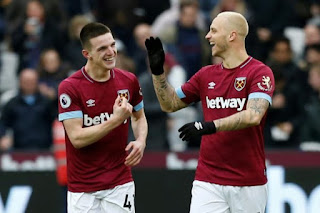 Declan Rice’s first West Ham goal secured a 1-0 win over Arsenal in London derby clash, moving the Hammers to the eighth place on the league table.
The victory in Saturday’s early kick-off at the London Stadium moved the Manuel Pellegrini’s boys to 31 points.
Teenage midfielder Rice gave himself an early present for his 20th birthday on Monday by scoring the only goal of the game three minutes into the second half.
“I can’t put it into the words,” an elated Rice told Sky Sports. “The lads are always on at me to take the shot on more.”


West Ham captain Mark Noble was almost as pleased as Rice himself, adding: “I am delighted for this young man to score the goal…He is a special talent and keeps working hard.”
The defeat dented Arsenal’s bid to break into the top four, with the Gunners still adrift of Chelsea — their next opponents — in the race for a Champions League place.
“It is difficult to win if you don’t score,” said Arsenal’s Laurent Koscielny, after a defeat that meant the Gunners had won just one of their last seven away Premier League matches.
The defender, looking ahead to next weekend’s clash with Chelsea at the Emirates Stadium, said: “It is a home game against an opponent in the top four. We know what we need to do. We need to prepare all week for this important team.”
West Ham named Marko Arnautovic in their starting line-up despite the Austrian forward’s brother and agent saying Thursday he wanted to move to the Chinese Super League.
And it appeared Arnautovic was waving goodbye to the home fans in a London Stadium record of over 59,000 when substituted in the 71st minute.
“We will see what happens in the next days,” said Manuel Pellegrini, the West Ham manager.
“It is an issue that the club must see what is the best for the player, for the club and for everyone.”
Former Arsenal favourite Samir Nasri started against his old club as the midfielder made his Premier League debut for the Hammers.
Koscielny and Shkodran Mustafi returned from injury for Arsenal but there was no place in their squad for Mesut Ozil.
The match was goalless at the interval following near-misses by Arsenal midfielder Matteo Guendouzi and Hammers playmaker Felipe Anderson.
That all changed in the 48th minute courtesy of Rice, a Republic of Ireland Under-21 international.
Granit Xhaka’s poor clearing header fell to Anderson, whose ball came to Rice via a neat lay-off from Nasri and Rice’s first-time shot gave Arsenal goalkeeper Bernd Leno little chance.
Arsenal pressed for an equaliser but the Hammers survived three minutes of stoppage time as they held on for victory

Safety of girls in sexist societies  0

Another Nigerian Artiste Zoro Accused Of Rape By Victim 0

Zanu-PF is declaring War on its citizens 0

Zec suspends elections 'as a way of aiding Thokozani Khupe'? 0

EPL: Ryan Giggs reveals why Ighalo is different from other Man Utd strikers 0

US pressure on Adesina: AfDB warned against compromise 0

COVID-19: Brazil threatens to pull out of WHO as Chloroquine trial begins 0

Re: Killings in Southern Kaduna: My people are under the  bondage of terrorists -Senator La’ah  -A rejoinder  0

NNPC alerts on fake diesel, urges motorists to avoid use 0

Score card of Nigerian Navy at 64 0

My daughter was blindfolded, tied like a criminal — distraught mother 0

Lady tenders ‘evidence’ of rape against House of Reps aspirant 0

COVID-19: Face masks must have 3 layers – WHO issues new precautions 0

COVID-19: WHO releases new guidelines on use of face mask 0

COVID-19: 42% of Nigerians lost their jobs during pandemic - NBS report 0

Rapists in Nigeria should get death sentence – FIDA 0

Diezani: Setback In Extradition Moves Over Her Dominica Republic Citizenship 0

Majek Fashek Dabbled Into Spiritism And It Affected Him Terribly – Ex-Bandmate, McRoy Reveals 0

Shock As Senior Advocate Of Nigeria, Badejo Slumps And Dies While Walking Out Of His Home 0

Safety of girls in sexist societies

Kindly Share This Story: By Deborah Adeojo As public gaze and feminist rage are directed towards seeking justice for Uwa, a 22-year-old undergraduate, raped and left for

Kindly Share This Story: By Evelyn Usman She never saw it coming, neither did she in her wildest imagination, envisage such would  happen at a place so

Another Nigerian Artiste Zoro Accused Of Rape By Victim

The past week has witnessed a surge in rape stories and reportage even as top Nigerian artistes get called out for being rapists.The latest music