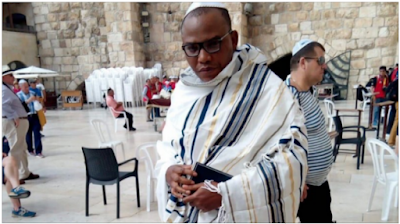 Leader of the Indigenous People of Biafra, IPOB, Nnamdi Kanu says intelligence reports gathered by the security arm of his organization shows that all state governors of the South east zone were working to return President Muhammadu Buhari in the forthcoming presidential poll.
Kanu stated this in a broadcast delivered on Radio Biafra network in Israel, and monitored by our correspondent.
He said, “The fact still remains that what happens in Nigeria is selection not election, if not why would Dave Umahi in PDP be campaigning for a murderous APC government that killed his own people.
“Why would Willie Obiano of Anambra State a supposed Igbo man be campaigning so viciously against Peter Obi his mentor and godfather? We know the all powerful INEC is owned and run by Fulani cabal under the direct supervision of Aso Rock which they also own.

“Only INEC announced results are considered valid so all it takes for a candidate to win, is to be in the good books of the Fulani cabal running Nigeria and you are guaranteed success. Those hoping that Atiku will sweep Biafraland because of the Obi factor are misguided because almost every governor in the South East is working for Jubril(Buhari).”
Kanu said several other prominent Igbo sons were backing Buhari to win the presidential election, in a contest where their brother, Peter Obi was a running mate to a major candidate, and also went ahead to list former Central bank governor, Prof Charles Soludo and Engr Arthur Eze as some of Buhari’s major backers in the zone.
”What should bother everyone more as I study the lives of Igbo big men is the emptiness of their mindless acquisition. After all the contracts Arthur Eze listed, I couldn’t trace any major industry, successful business, university organized philanthropy linked to him. What a shame. Even Soludo of all people is working for Jubril(Buhari),” he said.
Kanu said his group will not back down on the earlier declared election boycott, saying, “This current path we have chosen – the path of boycotting the 2019 elections – is a well considered one geared to leaving no one in doubt that we mean business. We know that some people are wondering what IPOB expects to gain when it refuses to participate in elections.
“I am keenly aware that, at first, the logic of a boycott makes little sense to many. Some have said that by participating in elections, IPOB will have a chance of helping to elect politicians amenable to self-determination and ultimately a Referendum. Well, that’s true but only in theory. In practice, experience has shown that votes hardly count in Nigeria; and where they may count, we have not yet seen any candidate willing to commit to the changes we demand, such that the boycott could be reconsidered as a whole, or piecemeal for such candidate.”
He also berated the governor of Ebonyi State, Umahi, saying his recent allegation of IPOB threatening to kidnap him and other South east governors was meant to incite the Nigeria Army against the group.
He described the the allegation as a very strong one, but stated that it has been proven that IPOB was not a violent organization, and that it never planned such.

AKINWUMI ADESINA: The inside story by Femi Adesina

Firms lose confidence in economy, index now down to -66.2%

Human Rights Writers Association of Nigeria, HURIWA, has described the reported reorganisation of the Nigerian Police Force by the President Muhammadu Buhari administration as cosmetic and deceptive. The

The leader of the Indigenous People of Biafra, IPoB, Nnamdi Kanu has promised to release some bombshell on Asari Dokubo, leader of Niger Delta Volunteers Force. The two