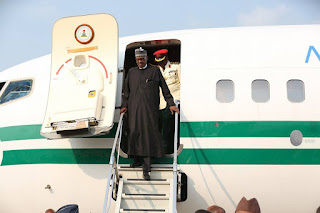 President Muhammadu Buhari has returned to Abuja from N’Djamena, Chad, where he participated in a one-day Extraordinary Session of the Conference of Heads of State and Government of the Community of Sahel-Saharan States (CEN-SAD).

While in N’Djamena on Saturday, the Chadian capital, President Buhari raised alarm over the influx of small arms into Nigeria, saying such weapons “are flowing into the hands of militia forces, bandits and insurgents who are becoming a threat to human rights and internal security.’’

He, therefore, stressed the need for wider cooperation among countries of Sahel and Saharan regions to counter the infiltration of these small arms to Nigeria.

According to him, his administration has worked closely with immediate neighbours in the last few years to stem the widespread availability of small arms and light weapons making their way into Nigeria.

He, however, noted that the “very disturbing recent developments” had impelled the administration to seek support from a wider circle of countries if the illegal inflows are to be curtailed.

The President, alongside his host and current Chairperson of CEN-SAD, Idriss Deby and their counterparts from Niger and Togo, with high-level representations from other member-countries, deliberated on the problems of irregular migration.

The leaders also deliberated on the menace of trafficking in persons, especially of women and children among other security issues.

Breaking: FG asks hotels, schools to get ready for isolation of COVID-19 patients

- FG said the country has recorded a total of 8,733 COVID-19 cases- Osagie Ehanire, the minister of health, noted that there have been complaints