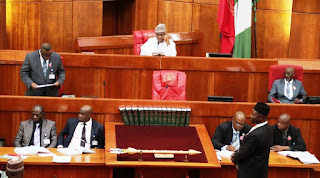 The battle of who emerges speaker of the ninth House is gradually taking shape as political alignments across party lines mounts centre stage.

Gradually the boys are caving way for the real men to face the battle- just last week one of the strongest contenders from the North East, Hon Tahir Monguno, APC, Borno threw in the towel by declaring support for the leader of the House, Hon Femi Gbajabiamila.

Dyegh in a chat with TNG said”the party as far as we are concerned has not zoned Speakership to any particular part of Nigeria.

“As for me I must get to the finishing line which is on the floor of the House.

Hon Mohammed Umar Bago, APC, Niger is the rave of the moment as he presently enjoys the position of the most accessible contestant.

Among the 14 contestants, the most visible is Bago who runs the most active  campaign Secretariat with the longest list of former and newly elected members working towards his Speakership ambition.

Bago in a chat recently said that “the APC Chairman is not more Buhari than myself because I have been part of Buhari since our CPC days.

He explained that” my quarrel with the issue of zoning it to the South West which is not official is that why must it be South West.

“If they had zoned it to South East I would have stepped down but for now I must cross the finishing line.

Bago a third timer, is the current Chairman House Committee on Maritime.

He looks good and from all indications, he is definitely not going to be a passenger in this nineth House Speakership race.

Idris Wase must have shot his foot by accepting to run as deputy to one of the strongest contenders.

It’s alleged that the Plateau lawmaker had visited Aso Villa where he agreed to step down and run as deputy.

When the allegation filtered out his North Central colleagues vowed to rubbish his ambition as he allegedly betrayed their trust.

This development made his campaign DG, Hon John Dyegh to declare his intention to run.

For sometime now, the Wase’s camp seems to be in a deep slumber.

The Gbajabiamila camp is very active they have toured almost the entire country soliciting support for his candidature.

Hon Nkeiruka Onyejeocha,APC, Abia is also active. She is the only female contestant and the only visible contender from the South East region.

A fourth timer with plenty of legislative experience. She is a two time Chairman of the Aviation committee which she professionally managed for two terms.

She looks good to grab it if finally, the party decides to zone it to South East.