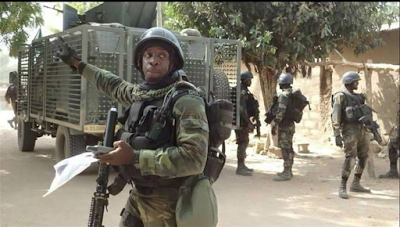 The leadership of the Armed Forces and the Nigerian Police Force have met and agreed to launch a special joint operation to rout bandits and other criminal elements currently terrorising residents of the country.

The Defence Headquarters, Abuja, confirmed this on Saturday, saying the armed forces and the police authorities had identified gaps in their efforts and resolved to address those issues together.

The DHQ spokesman, Col. Onyema Nwachukwu, in an interview with newsmen, said the military and police were given “marching orders”, and had carried out a re-evaluation of their efforts against the bandits as well as the next line of action.

Nwachukwu stated, “The leadership of the Armed Forces of Nigeria, under Gen Abayomi Olonisakin, the Chief of the Defence Staff, and the police have met and the meeting was to identify gaps in the operations and how to address those issues.

“There is a special joint operation coming up and all is already set for it. I cannot give you details of the operation. But it will take care of the banditry in the North-West region and other criminalities.”

A top military source, who was part of the meeting, told one of our correspondents that the special joint operation had already been named.

“The special joint operation is already in the pipeline with specific deployments expected from the army, the air force, the navy and the police, even with contributions from the Department of State Services, and the Nigerian Immigration Service,” the source added.

The Nigeria Police Force had initially told one of our correspondents that the agency required support from other security agencies as well as the cooperation of political leaders among other residents of various communities under attacks by bandits, kidnappers and other criminals to free such areas from the grips of the hoodlums.

The police spokesperson, Mr Frank Mba, said this in an interview with newsmen.

He said the Inspector-General of Police, Mr Mohammed Adamu, had toured the affected states to assess the security arrangements in place to curb the activities of the criminals terrorising the states, saying the war would soon be won.

Mba explained that the police under Adamu were already working with indigenes of the affected communities to get useful information needed to rout the criminals and free the communities.

He stated, “What we require to permanently put an end to this menace is a broad-based action with intervention at multiple levels by multiple agencies. We are leading the charge at the security and law enforcement level while we expect support at the political level from the state and local government levels, religious level and traditional institution as well as socio cultural level.

“The present leadership of the force is already adopting community policing strategy as one of its main strategies for combating not only banditry but other forms of crime and criminality. That is why the Inspector-General of Police, Mohammed Adamu, has been on tour of the affected areas. The IGP was in Birni Gwari, in Kaduna, he was in Zamfara, Sokoto and Katsina within 72 hours.

“We believe that the Nigeria Police, acting alone all by itself, certainly will not be able to win the war. We need to bring on board more relevant stakeholders and that is what community policing is all about. I want to appeal to Nigerians to be patient and provide us with relevant support. I acknowledge the fact that this is a challenging time but the challenges are certainly not insurmountable.

The Director-General of the Nigeria Centre for Disease Control (NCDC), Chikwe Ihekweazu, has said that COVID-19 diagnostic test kits are being sold in “black markets”.Ihekweazu