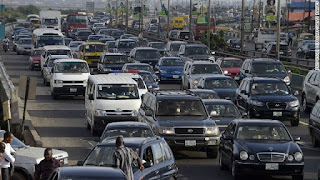 Motorists in Jigawa have appealed to the Federal Government to rehabilitate Birninkudu highway,to reduce accident on the road.
They made the appeal in a separate interview with the newsmen on Wednesday at Rasheed Shekoni Specialist Hospital, Dutse.
The motorists were parts of sympathisers who gathered at the hospital to receive the remains of Abdullahi Gabdo, Manager, Kano Electricity Distribution Company (KEDCO) who died in an accident on Birninkudu road.
The accident which happened at 7PM also claimed the life of another person whose name could not be ascertained as at the time of this report.


A driver, Malam Ibrahim Muhammad, described the road as a death trap, adding that people died almost a daily basis due to accident, occasioned by many potholes and sharp bends on the road.
Alhaji Auwalu Musa and Suleiman Abubakar noted that the road had suffered many years of neglect, a development they said made the road fell short of meeting modern standard in road construction.
It was gathered that the road links the North West zone with states such as Bauchi, Gombe, Taraba, Adamawa, Yobe and Borno in the North East zone as well as countries like Cameroon and Chad.
Abubakar said: “There are lots of potholes on the road and some areas are damaged due to age long of the road while some areas are completely washed away by rainfall,”
“We are, therefore, appealing to the federal government to rehabilitate or construct the road in view of its importance to the socio-economic wellbeing of the people.
“We plead with that the Federal government to direct the Federal Roads Maintenance Agency (FERMA) to patch or rehabilitate the road to reduce accident on the road.“
When contacted, the Federal Maintenance Engineer in charge of Jigawa, Mr Adamu Gulma, said that the Federal government was aware of the deplorable condition of the federal high ways in the state.
Gulma stated that government, through FERMA was making preparations to address the problem, with a view to making the highways conducive for motorist in the state.
He said: “Very soon, aggressive patching of potholes will commence to prevent the incessant accidents on the roads.
“We are also engaged in vegetation control along the federal roads across the state.”
“We have directed contractors handling projects with us to start their work with immediate effect or we will revoke the contract.

“This is because we don’t want a situation where people will be losing their lives due to potholes on our high ways.” Gulma said.