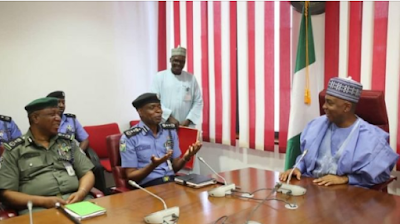 On Wednesday, the senate passed a bill seeking to reform the Nigeria police force.
The bill was passed on the floor of the upper legislative chamber on Wednesday after Tijjani Kaura, chairman of the police affairs committee, presented a report.
While moving for the bill to be passed, Kaura said during a public hearing, stakeholders were divided over the appointment of inspector-general of the police (IGP) subject to approval of the senate.
The police committee chairman said stakeholders made a strong case for community policing.

” [It was recommended] that the establishment of community police is strongly recommended,” the lawmaker said.
“That the tenure of the office of the inspector-general of police should be a single four-year term which will make for a second tenure.”
Here are highlights of the police reform bill: