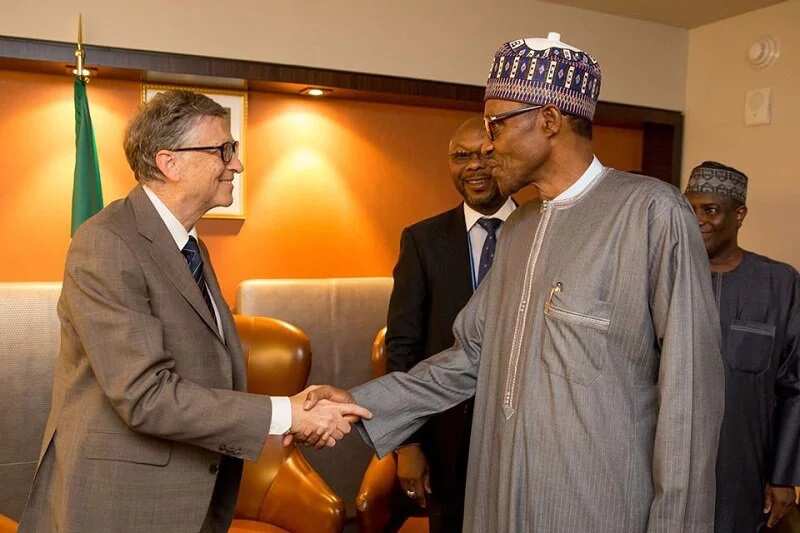 - According to the presidency, Bill Gates called President Buhari to congratulate him on winning the 2019 presidential election

- During the telephone conversation, the president said Gates’ wealth had benefited the country and thanked him for the call

President Muhammadu Buhari has commended one of the world’s richest men, Bill Gates for his consistent and generous support to public causes around the globe.

The president, in a telephone conversation with Gates, specifically lauded him for supporting the eradication of polio and HIV diseases in Africa and Nigeria in particular.

Malam Garba Shehu, the senior special assistant to the president on media and publicity, in a statement in Abuja on Wednesday, April 17, said Gates on his part, congratulated the President upon his resounding election victory for a second four-year term of office.

The presidential aide quoted Gates as saying that he was happy to be associated with the president.

He said Gates restated his “commitment to the success of the administration as well as the progress, prosperity and well-being of Nigeria. He expressed willingness to do more for the country.’’

Buhari reiterated his opinion that Gates’ wealth had benefited Nigeria’s development, and expressed appreciation for the call.

Meanwhile, President Buhari has said he is far more qualified to be president that Atiku Abubakar, the presidential candidate of the Peoples Democratic Party.

Buhari was declared winner of the 2019 election but Atiku has gone to court to challenge the victory claiming he was the rightful winner of the election.

The president in a response filed by a team of his lawyers led by Wole Olanipekun (SAN), said he was more qualified than the candidate of the PDP.