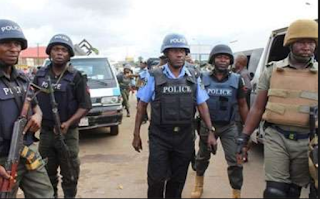 The police in Delta State yesterday foiled a suspected kidnap of a young girl at the popular Ogbe-ogonogo market in the heart of Asaba, the state capital.

The girl was leaving the market on Thursday afternoon and had boarded a tricycle, popularly known as Keke NAPEP when two boys entered the same tricycle, putting her in the middle.

It dawned on her that she was being taken hostage when she approached her destination and signalled the Keke operator to drop her but he refused to stop.

Witnesses told newsmen that an alarm raised by the girl attracted sympathisers and mobile policemen on patrol who pursued the tricycle.

When they were eventually apprehended by the police, it was discovered that the girl had either been drugged or hypnotised, as she temporarily lost memory.

Witnesses further said one of the suspected kidnappers, in an alleged bid to disappear, threw a ring into his mouth but a policeman held his mouth wide open and removed the ring. Irate youths who gathered around the scene attempted to lynch the gang but the police prevented them.