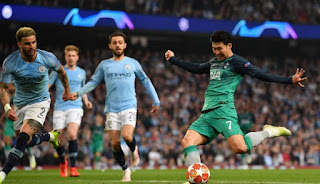 Tottenham boss Mauricio Pochettino is determined to further derail Manchester City’s season when the two clubs meet again on Saturday in a Premier League fixture.
But the Spurs manager admits it will be very tough for his side, having already ended City’s quadruple bid when they secured a dramatic away-goals win in the Champions League on Wednesday night.
City have now turned their attention to defending their Premier League crown and they will go back to the top of the pile if they beat Spurs.
City boss Pep Guardiola believes the hurt from Wednesday’s Champions League extraordinary game will serve as motivation, but Pochettino has denied the hosts will be out for revenge.