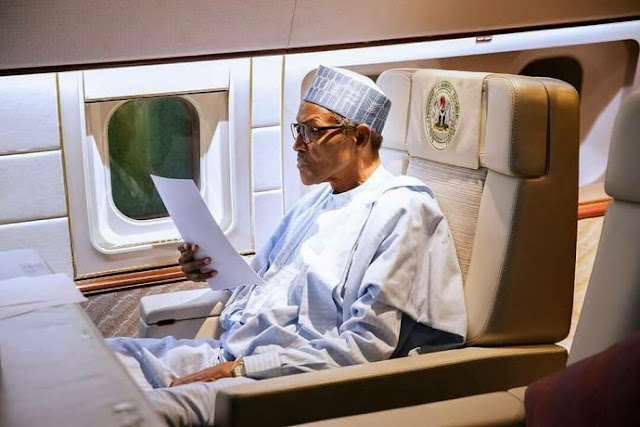 President Muhammadu Buhari has spent a total of 404 days (a year and 39 days) travelling to 33 countries on four continents in about four years of his first term in office.

The country he visited the most was the United Kingdom where he spent 217 days mostly on health grounds and meetings of Commonwealth Heads of State and Government.

His second most visited country was the United States where he spent a combined 41 non-consecutive days.

France was the third most visited country with Buhari spending 14 non-consecutive days there. China came fourth with 13 days and Jordan occupied the fifth position with eight days.

Incidentally, the President did not visit any country in South America.

Apart from medical reasons, the President was out of the country to seek security assistance, improve on the nation’s economy and trade, and seek support for his fight against corruption.

Findings showed that while the President was able to build an alliance with neighbouring countries to curb the activities of Boko Haram, his travels did not translate much to Foreign Direct Investment except in 2016.

Breakdown of Buhari’s travels in 2015

Shortly after his inauguration, Buhari on June 3 and 4, 2015 travelled to the Republic of Niger and Chad Republic for consultations on how to tackle terrorism in the country and the region.

He went for the Republic of Benin’s Independence Day celebration from August 2 to August 3, 2015.

In September 2015, Buhari embarked on a one-day visit to Ghana on the 7th and a three-day official visit to France on the 14th, returning on the 16th of September.

The President travelled to New York for the 70th United Nations General Assembly on September 24, 2015 and returned on September 29.

From October 26 to 30, 2015, he travelled to New Delhi in India for the Indian-African Forum and on his way back, he made a technical stopover at Khartoum, Sudan.

From November 22 to 24, 2015, the President travelled to Tehran, Iran for the third Gas Exporting Countries’ Forum.

From November 26 to 30, 2015, the President was in Malta to participate in the 2015 Commonwealth Heads of Government Meeting.

From Malta, he travelled to France on November 30, 2015 for the UN Climate Change Summit and returned on December 1.

On December 3, 2015, he departed for South Africa to attend the China/Africa Summit. He returned on December 5.

On December 10, 2015, Buhari attended the last rites for the late former President Mathieu Kerekou of the Republic of Benin.

Breakdown of Buhari’s travels in 2016

Buhari’s first foreign trip in 2016 was to Benin Republic on January 8 where he attended the 11th Summit of the Heads of State and Government of the Niger Basin Authority.

From January 17 to 20, 2016, he attended the World Future Energy Summit in Abu Dhabi, United Arab Emirates.

From January 27 to 29, 2016, the President was in Kenya on an official visit. From Kenya, he headed to Addis Ababa, Ethiopia for an African Union meeting and returned to Nigeria on January 30.

From February 2 to 4, 2016, the President visited France to attend the Special Session of the European Union Parliament.

From February 5 to 10, 2016, barely eight months into his tenure, he travelled to the UK for his first vacation.

On February 18, 2016, he departed for Egypt to attend the Sharm el-Sheikh ‘Africa 2016’ Business Forum and returned to Abuja the following day.

From February 22 to 29, 2016, the President visited Saudi Arabia and Qatar. He met with government officials and also visited Medina and Grand Mosque in Mecca, where he performed prayers for the peace and unity of Nigeria.

On March 14, 2016, Buhari visited Equatorial Guinea for two days and had discussions on agreement on Joint Maritime Policing.

From March 29 to April 3, 2016, he was in Washington DC attending a Nuclear Security Summit. He returned to Abuja on April 4.

On May 10, the President departed for the Anti-Corruption Summit in the UK. He returned to Abuja on May 14 but left for the UK on June 6 for his first medical vacation, following reports that he had an ear infection. He returned on June 19.

On August 8, 2016, Buhari travelled to Chad for the inauguration of President Idris Deby and from August 27 to 28, 2016, he visited Kenya to attend the Tokyo Conference on Africa.

On September 18, 2016, the President travelled to New York, US where he spent five days to attend the 71st UN General Assembly.

He spent five days from November 14 to 18, 2016 in Morocco where he attended the UN Climate Change Conference.

On November 23, 2016, he travelled to Equatorial Guinea for the 4th Africa/Arab summit.

From December 5 to 7, 2016, Buhari was in Senegal where he attended the Dakar International Forum on Peace and Security in Africa.

Breakdown of Buhari’s travels in 2017

The President’s first foreign trip in 2017 was to Ghana where he attended the inauguration of President Nana Akufo-Addo on January 7.

On January 13, he travelled to The Gambia to attend a high-level ECOWAS meeting. He was in Mali the following day for the 27th African France Summit.

On January 19, 2017, the President travelled to the UK on medical leave and returned on March 10 after spending 51 days in the UK.

Barely 40 days after, Buhari travelled again to the UK for medical attention on May 8, 2017 and remained there till August 19, 2017, spending 104 days, a record which surpassed that of the late President Umaru Yar’Adua.

On September 17, 2017, he left for the US to attend the 72nd UN General Assembly where he stayed till September 21.

He travelled from the US to the UK for medical purposes and returned to Abuja on September 25, 2017.

On October 18, 2017, he travelled along with members of his family to Turkey on a working visit and returned on October 22.

Breakdown of Buhari’s travels in 2018

His first foreign trip in 2018 was to Ethiopia from January 28 to 30 for the African Union summit.

From April 28 to May 4, 2018, Buhari journeyed to the US where he met with President Donald Trump at the White House where they discussed security and trade.

Buhari spent seven days away from home and went to the UK for a few hours for what his handlers termed a “technical stopover.”

Four days after returning to Nigeria, however, Buhari returned to the UK for medical reasons on May 8, 2018, and he returned on May 11.

From June 10 to 11, 2018, the President was in Morocco where three agreements between Nigeria and the Moroccan government were signed.

From June 30 to July 3, 2018, Buhari visited Mauritania for the ordinary session of the AU Assembly of Heads of State and Government.

On July 15, Buhari travelled to The Netherlands for the 20th anniversary of the International Criminal Court. He returned on July 18.

President Buhari travelled to Togo on July 29, 2018 where he participated in the Joint ECOWAS-ECCAS Heads of State and Government Summit on Peace, Security, Stability and Fight against Terrorism and Violent Extremism.

The President again travelled to London on a working leave on August 3, 2018 and returned on the 18th, spending a total of 16 days.

The President handlers said during interviews that “he may just see his doctors briefly during the visit.”

On August 31, 2018, the President travelled to China to attend a summit on China-Africa Cooperation and returned after eight days on September 7, 2018.

From September 23 to 29, 2018, he was out of the country, this time to the United States to attend the UN General Assembly.

He travelled to France for a peace forum on November 10 where he spent six days. From November 29 to December 1, 2018, Buhari attended a regional summit in Chad.

The President travelled to Poland on a working visit on December 1, 2018 and returned on December 5.

Break from foreign trips for elections

The President took a break from foreign trips for three months as he toured the 36 states for the 2019 General Elections.

But after the elections had come and gone, he travelled on April 2, 2019 where he attended the inauguration of Senegalese President, Macky Sall.

From April 4 to 7, 2019, he attended the World Economic Forum in Jordan after which he visited the United Arab Emirates from April 7 to 10 for an investment meeting. Again, he travelled to Chad on April 13, 2019 for a one-day official visit.