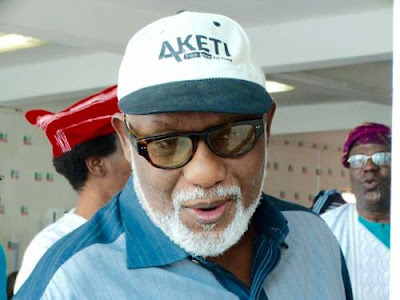 The All Progressives Congress (APC) has suspended Rotimi Akeredolu, Governor of Ondo State, for purportedly engaging in anti-party activities.
A member of the ruling party’s National Working Committee (NWC) confirmed that Governor Akeredolu has been suspended and explained that the governor was suspended following a similar decision by the party to suspend Ibukunle Amosun and Rochas Okorocha, governors of Imo and Ogun states respectively, for allegedly participating in anti-party activities.

According to reports, Governor Akeredolu had failed to respond to the query issued to him by the party.
The party was not oblivious to the silent complaints by party members over the perceived injustice of the APC to suspend the Ondo governor, following the parallel action taken against the Imo and Ogun governors.
According to a statement issued by Lanre Issa-Onilu, APC National Publicity Secretary, the ruling party described the Ondo governor’s actions “greatly affected the fortunes of its candidates in the recently conducted presidential and National Assembly elections in the state.”