I have plans to establish a university -Aisha Buhari 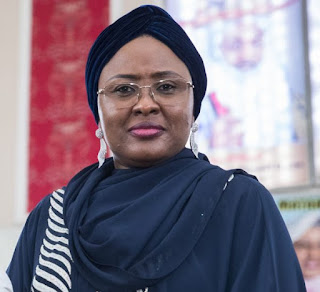 Mrs Aisha Buhari, wife of the President, has expressed her plan to establish a private university to be known as “Muhammadu Buhari University”.
She disclosed this on Saturday during a townhal meeting in Yola organized by her in collaboration with concern indigenes of Adamawa.
Aisha, who did not however reveal when or where the university would be sited, explained that the university would be established in collaboration with partners from Sudan and Qatar.
Aisha who lamented the challenges facing education and various sectors in the state, called for active support of the state indigenes in complementing government efforts.

“I cannot conclude without suggesting how we can complement the efforts of government in achieving some of its developmental goals.
“On this note, I would like to advocate for the establishment of Adamawa Development Trust Fund through which prioritized developmental projects can be financed and implemented,” she said.
Amb. Fati Ballah also called for reconciliation and forgiveness among the people of the state and the setting up of a committee to come up with a blueprint for the development of the state.
Alhaji Sadiq Daware, who spoke on agriculture at the meeting, noted that 80 per cent of the state land was arable and suitable for farming.
Daware added that with River Benue which passes through the state, the state has the potential for massive irrigation and all year round farming programmes.
The News Agency of Nigeria (NAN) reports that other speakers at the meeting include Prof. Shehu Iya of Modibbo Adama University, Yola, who spoke on education; Prof. Auwal Abubakar of Federal Medical Centre, Yola, who spoke on health; and Mrs Helen Mathias who spoke on women and youths.
Othersvare Mallam Umar Abubakar who spoke on security; Gen. Buba Marwa on drugs; Sen. Silas Zwingina on Good Governance, and Dr Umar Bindir who spoke on Poverty.
The meeting was also attended by politicians, particularly APC, PDP and ADC members in the state. (NAN)