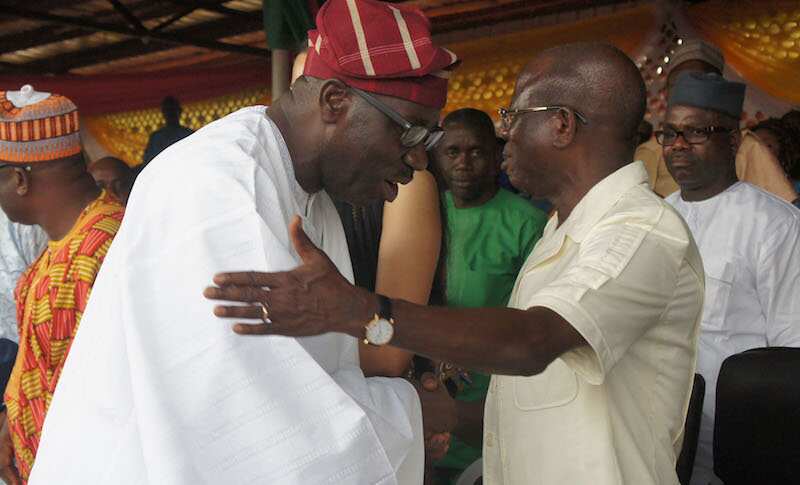 The seeming disagreement in the ranks of Edo State All Progressives Congress (APC) and specifically the feud between the party's national chairman, Comrade Adams Oshiomhole and Governor Godwin Obaseki has taken a new dimension.

The cracks in the party are now evident with the leadership of the party in Edo north senatorial district warning that it would resist any attempt by the state government to tarnish the name of Oshiomhole.

Oshiomhole is from northern senatorial district of the south-south state.

In a communique signed by Alhaji Usman Mogaji Charlton and Ahmed Musa Momoh,‎ the party urged the state governor, Godwin Obaseki to call his media aides to order, alleging that they had embarked on campaign of calumny against Oshiomhole with a view to joining his political opponents across the nation in scandalizing his name.

Part of the communique read: “The meeting passed a vote of confidence on the leadership of the national chairman of the APC, Comrade Oshiomhole. We gathered to basically react to the publication in the nation's newspapers, which tends to portray in bad light the party primaries conducted by the Oshiomhole-led NWC.

“We have no doubt that the advert was orchestrated by those in Osadebey Avenue who rose to power and suddenly forgot how they got there. We condemn that publication and urge the state government to stop playing hide-and-seek game in its attempt to rubbish the legacies of Oshiomhole which we will surely resist.

“The leaders also reaffirmed that the national chairman remains the undisputed leader of APC in Edo north and Edo state, respectively. They resolved to always stand by him and stand for him at all-times.

“The leaders warned those attempting to destroy the hard-earned, amiable character and reputation of the APC national chairman to desist from such unwholesome practice.

“The meeting was attended by leaders drawn from the 64 wards in Edo north senatorial district.”

Meanwhile, Imo state governor, Rochas Okorocha, has accused Oshiomhole of witch-hunting him after he ensured his emergence as national chairman of the APC.

Okorocha who is at logger heads with the national leadership of the APC, accused Oshiomhole of plotting to bring him down.

READ ALSO:2023 presidency: Amaechi says Igbos have nothing to bargain with

“There is nothing personal between me and Adams Oshiomhole other than the fact that he is part and parcel of this high level of conspiracy to bring down Rochas politically.

“What is painful is that Adam Oshiomhole that I literally put into this position,” Okorocha said at a news conference in Abuja.