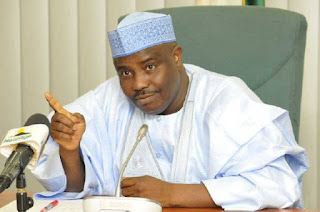 The Sokoto State Governor, Aminu Tambuwal, has vowed to resist any attempt to stop his inauguration for second term in office.

In a statement yesterday by his Senior Special Assistant on Special Duties, Alhaji Yusuf Dingyadi, the governor alleged of plots to cause political chaos in the state.

He said that certain individuals were spreading lies and creating confusion that the court was going to remove him from office and give power to the APC.

Tambuwal added that his posters along Birnin Kebbi Road, Maiduguri Road, Airport Road and some other areas within the metropolis had been removed and replaced with those of the APC governorship candidate.

Tambuwal stressed that only legal means could stop his government.

The statement reads, “Election is over, we have won the election and we have offered a hand of fellowship, we asked them to come so that we develop Sokoto State, they refused and went to court, why can’t they allow the court to pass its verdict?

“You can’t take your case to court and start making political noise and telling people lies when even the court has not started its own assignment.

“We are still in the process of pre-hearing, we didn’t even get to the time witnesses are called to testify on the election manipulation they alleged, yet they have started going round telling people lies, especially in the rural areas, they want to show that government is coming to them.”

The governor advised the opposition to allow the court to their work.

He continued, “PDP in Sokoto is not looking for any backdoor judgement. You allow the court to do what is needful, we have confidence in court because we won election with divine intervention.”

He called on law enforcement agencies in Sokoto to stop what he described as political rascality in Sokoto State.

“We don’t want any political crisis, we don’t want any tension in Sokoto, Sokoto people are peace-loving, we call on security agents to investigate and find out the sponsors of the political rascality in the state,” he said.

BREAKING: Sanwo-Olu reveals when schools might reopen in Lagos State

The Governor of Lagos State, Babajide Sanwo-Olu, has said a decision on the reopening of schools in the state, will be made in the next two weeks. Sanwo-Olu