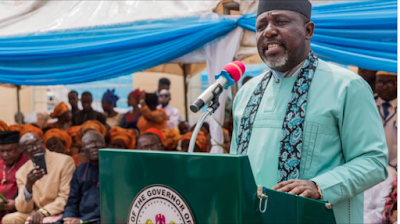 The Imo Charter Forum, ICF, has urged the state’s incoming governor, Emeka Ihedioha to ensure that the balance of Paris Club refund due for the state is not released to the outgoing governor, Rochas Okorocha, whose tenure comes to an end in less than two weeks.

The supervising Finance Minister, Zainab Ahmed had last week, on Thursday in Abuja, stated that states yet to collect their balance of the Paris Club debts refunds would soon be paid.

She had said about N649.434 billion has been released for the final phase of the Paris Club debts refunds, adding that the total sum was verified by the Ministry as the outstanding balance to be paid to the state governments.

The Minister assured that states with outstanding balances of the refund would be paid in due course.


Reacting to the development, ICF in a statement signed by its National Secretary, Hon. Zebulon Nwariri, said while it welcomed the “announcement of the refunds with open arms, if the fund is released to the outgoing governors, they would find excuses to spend it on frivolities or even divert it to private coffers.”

ICF an umbrella body of different associations and stakeholders on governance and welfare of Imo State, stated that the previous releases of such funds have not been duly accounted for by some of the governors.

The Forum stated that the “case of Okorocha was peculiar, as the state under his rule presently owes workers and pensioners, several month salaries and pensions, the same with local contractors who executed jobs but have not been paid despite many of such Paris Club refunds and huge internally generated revenue.”

ICF urged the Federal Government to “wait for the incoming governors to be inaugurated so that the money would serve as their take-off grant, in view of the fact that many of them would be inheriting empty treasuries from the out-going ones.”

The statement reads: “We welcome the news by the Federal Government that the last tranche of Paris Club refund has been released. For us, this would serve as take-off grant for some of the incoming governors, most of who would be inheriting empty treasuries from the out-going governors.

“The case of Imo state is peculiar because Governor Rochas Okorocha has no respect for accountability and due process with finances and has always seen the money belonging to Imo State as his personal resource.

“The Federal Government may need to be reminded that Rochas is owing workers over six months of unpaid salaries, the same with pensioners and contractors. This is in spite of the fact the state rakes in much revenue from internal revenue streams, in addition to the huge releases in the past from the same Paris Club refunds.

“We, therefore, urge the incoming governor, Rt. Hon. Emeka Ihedioha to do whatever is legally possible to safeguard Imo State’s share of the latest refunds by making sure that the money is not released to Rochas before he lives office in a few days from now. He must ensure that the money does not go into the hands of out-going governor Rochas Okorocha as they say that prevention is better than cure.”