9 days to inauguration of his second term, Buhari meets Tinubu in Makkah 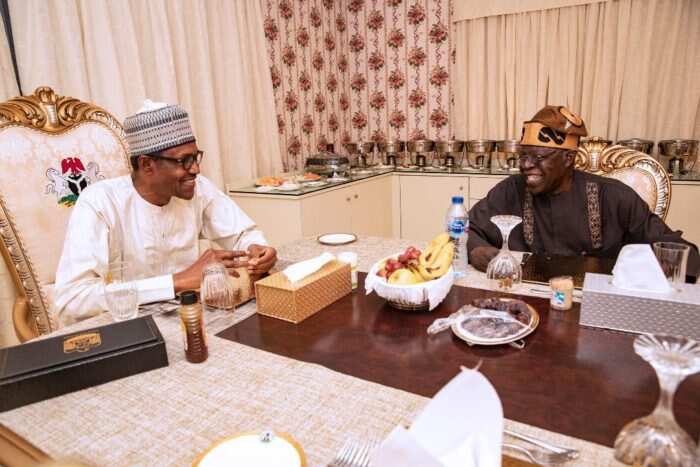 - President Buhari on Monday, May 20, met with the national leader of APC, Asiwaju Bola Tinubu

Barely 24 hours after hosting Abdulaziz Yari, governor of Zamfara state, President Muhammadu Buhari held a meeting with Mamman Daura, his cousin, and Bola Tinubu, a national leader of the All Progressives Congress (APC), in Saudi Arabia, where he is performing lesser hajj.

Premium Times reports that the meeting on Monday, May 20, tagged “Iftar dinner meeting” by the presidency is coming few days to the inauguration of Buhari for a second term in office.

Legit.ng gathered that a statement by the spokesperson to Buhari, Garba Shehu, said that Tinubu used the occasion to appeal to elderly Nigerians to avoid inflammatory statements that could undermine peaceful co-existence among the nation’s diverse communities.

Also in attendance, according to Shehu, were the Sultan of Sokoto, Muhammadu Sa’ad Abubakar, and Emir of Kazaure, Najib Adamu.

He said the former Lagos state governor said all citizens should consider the enormity of challenges facing the nation, and support the president.

He also said Tinubu urged Nigerians to rally round Buhari to solve problems and stabilise the polity.

“The president worked hard and will continue to do so to ensure peace and stability in the country, which are important for the economy to make progress. These are the key pegs of his agenda. Let us all come together to support him,” he reportedly said.

Tinubu’s appeal for stability is perhaps connected to his earlier criticism of the main opposition Peoples Democratic Party (PDP).

The governing party and the PDP, have recently been engaged in a war of words, each accusing the other of plotting to overheat the polity.

Tinubu on Monday, May 20, said the PDP is reputed for “saucy and distractive statements’’, urging Nigerians not to be angry with the opposition party, but assist them in overcoming their “colossal defeat” in the February 2019 elections.

“Don’t blame them. They are handicapped by the traumatic feelings of the colossal loss of the election. You should help them to manage the trauma,” he said.

Tinubu commended Buhari for the recognition of June 12 as the nation’s Democracy Day.

In his remarks, Sultan Abubakar reportedly pledged his support to the success of the president’s administration.

The Sultan led prayers for President Buhari’s second term in office, and for the nation to overcome current challenges.

Other guests at the Iftar dinner were: Nigerian Ambassador to Saudi Arabia, Isa Dodo; the president’s nephew, Mamman Daura; Isma’ila Isa; Wale Tinubu; and Hakeem P. Fahm, who is the commissioner of science and technology, Lagos state.

Meanwhile, Legit.ng had previously reported that the national leader of the All Progressives Congress (APC), Asiwaju Bola Ahmed Tinubu, was on Monday, May 20, told by the Arewa Youths Consultative Forum (AYCF) to do away with any idea of becoming the president of Nigeria in 2023.