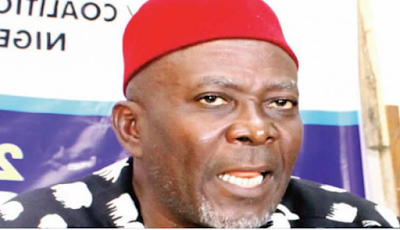 Uche Okwukwu, secretary-general of Ohanaeze Ndigbo, says the statement credited to Rotimi Amaechi, minister of transportation, on Igbo presidency is “nothing but the truth”.

In a statement on Monday, Okwukwu said those who attacked the minister over the statement were politically ignorant.

In an interview, Amaechi had said the people of the south-east should not demand the presidency in 2023 because the Igbo have nothing to bring to the negotiation table.

The statement drew criticisms from stakeholders in the region.

“In the past few days, I have followed the hopeless and unnecessary attacks by a few misguided and politically ignorant Igbo sons against the Minister of Transportation, Chibuike Amaechi, because of the truthful comment he made about the Igbo quest for the Presidency in 2023,” Okwukwu said.

“Amaechi predictable assertion to the effect that Ndigbo has by an act of omission or commission shot themselves out of the presidency come 2023 is nothing but the truth.

“To the best of my knowledge as the Secretary General, Ohanaeze Ndigbo, the suspended President General Chief John Nwodo betrayed Amaechi and the Igbo race as he (Nwodo) had earlier spoken with and agreed with him (Amaechi) that Ohanaeze Ndigbo will be neutral by not endorsing any candidate for the presidential election. In 2015, Ohanaeze took this path and failed.

“Regrettably, Nwodo and the likes of Mazi Okwu Nnabuike purportedly endorsed Alhaji Atiku Abubakar without affording Amaechi (then director-general, Buhari campaign organization), the opportunity to present the reasons for the president’s bid for a second term.

“Amaechi and his fellow patriots had argued that it was better for Ndigbo to vote massively for President Buhari to provide them the space to politically and morally demand for an Igbo President in 2023. The Question is, if Atiku had won, will Nnabuike be asking for the presidency in 2023. The obvious answer is no.”

The secretary-general of the apex Igbo socio-cultural group maintained that those who criticised the minister should apologise to him.

“He has the political and strategic experience and had commanded a campaign organization twice and secured victory twice, while Mazi Okwu Nnabuike and his likes had blindly endorsed failure twice.”