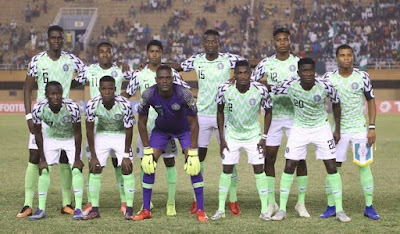 Nigeria begin their quest for glory at the 2019 FIFA Under-20 World Cup in Poland against Qatar on Friday.

But it is a match which appears to be a seemingly easy but tricky hurdle for the Flying Eagles.

The Flying Eagles will be making their 12th appearance on the global scene, thanks to their fourth-place finish at the Africa U-20 Cup of Nations staged in Niger Republic in February.

For the Asians, Poland 2019 will be their fourth appearance and they will be hoping to better their second-place finish achieved in Australia 1981.

However, to achieve this, they must first navigate past the Nigerian side before taking on Ukraine and the U.S. in Group D.

Two-times runners-up Nigeria, on their part, will be going all out for the three points when they take to the pitch of the 15,300 –capacity Tychy Stadium.

Coach Paul Aigbogun and his assistants have somewhat calibrated a new ensemble, leaving out half of the squad members from the Africa U-20 Cup of Nations.

Aigbogun has gone on to also infuse into the team a number of exciting talents in midfield and attacking realms.

While the choice of goalkeeper is between Detan Ogundare and Olawale Oremade, Valentine Ozornwafor and Igoh Ogbu are likely to keep their spots in central defence.

Team captain Ikouwem Udoh Utin would be at left back, while Jamil Muhammad could be at right back.

In the midfield, much attention will be on the England-based duo of Nnamdi Ofoborh and Ayotomiwa Dele-Bashiru, as well as AC Perugia’s former junior international Kingsley Michael.

In this sector also are home-based professionals Effiom Maxwell and Aniekeme Okon, who are rapid raiders on their day.

Dele-Bashiru, who is of England champions Manchester City, has already been tipped by world football ruling body FIFA as one of the players from whom much is expected of in Poland.

Aigbogun was quoted on Thursday as saying that the group was aware of the pedigree of Nigeria at the FIFA U20 World Cup and cannot afford to under-perform.

“We have a tough history to match. Silver medals on two occasions and bronze medals once, and a number of quarter-final appearances.

“That’s why we must start very well, by taking the points against Qatar and then march on with confidence and self assurance.

“We are flying the flag of nearly 200 million Nigerians, as well as that of the African continent. We have put a lot of work into building a squad that will make Nigeria and Africa proud,” he said.

Utin was also quoted as saying that the game against Qatar was a big match for the team just as every other match in the competition.

“We know the importance of picking up the three points in our first match, which is why we are determined to go all out.

“Taking the first three points will help us plan our approach better for the remaining matches in the group phase, and also boost our confidence,” Utin said in Katowice on Thursday.

A cross-section of football enthusiasts who spoke to the News Agency of Nigeria (NAN) in separate interviews however noted that participating teams at the cadet World Cup had vastly improved.

They therefore warned the current Flying Eagles team not to underrate any of their group opponents in the tournament.

Samson Siasia, an ex-international and former coach of the Super Eagles, said winning the first game was always very important in a tournament, adding that the team must not be complacent.

“I don’t want them to see any of the countries as non-footballing nations but I just want them to be careful because football at this level is won from the first game.

“Once you are able to tidy up your first game, and then your second game, you should have at least been able to qualify from your group to the second stage already,’’ he said.

Emmanuel Babayaro, also an ex-international, said while he was not expecting any of the teams in the Flying Eagles’ group to be push-overs, Nigeria should have no problems qualifying from there.

“Having ceded the 2022 World Cup to Qatar, they will be well prepared to meet the standards expected of them. I am very sure that they will be coming out very strong in order to prove a point.

“However, I don’t expect anything short of Nigeria qualifying for the next stage,” he said.

It was gathered that the team will leave their hotel in Katowice for the short drive to Tychy on Friday.