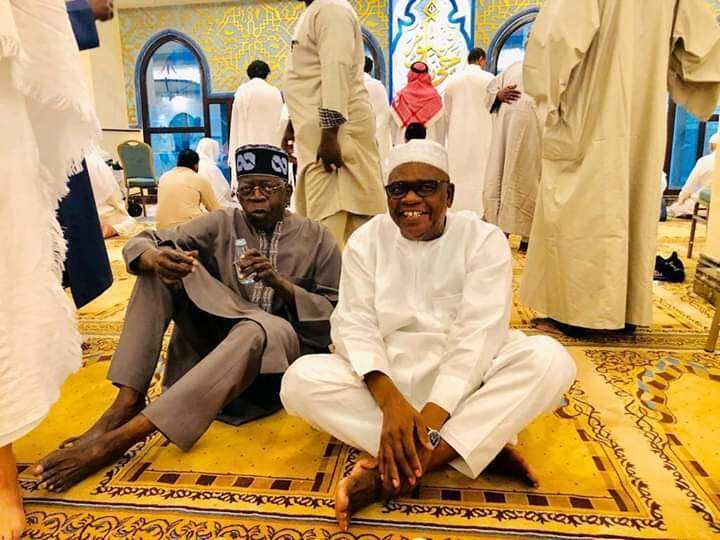 Emerging report by Independent indicated that Senator Danjuma Goje and the national leader of the All Progressives Congress (APC), Bola Tinubu, held secret meetings in Saudi Arabia over Senate presidency.

Legit.ng gathered that both Goje and Tinubu are currently in Saudi Arabia for lesser hajj.

Goje is the strongest opponent against Ahmed Lawan for the position of Senate President.

Both Tinubu and APC earlier indicated support in supporting Lawan.

Meanwhile, Legit.ng had previously reported that a report had it that the opposition Peoples Democratic Party (PDP) would field a candidate for the 9th Senate presidency contest, if Senator Danjuma Goje eventually fails to participate in the race.

It was reported that Goje is a former governor of Gombe state and senator representing Gombe central senatorial district in the National Assembly.

According to the report, the PDP has been monitoring direction of events, to see what would happen in the APC, with respect to who would contest as candidates of the ruling party before deciding on whether or not to participate in the race.

One of the sources quoted in the report said since Goje appears to be reluctant to publicly declare his interest in the Senate presidency, the opposition party is waiting for the right time to take appropriate decision on the matter.

The source hinted that the PDP had not been definitive on whether or not it would field a candidate because the party’s intention has been to support Goje to emerge the next president of the Senate by giving him block vote.