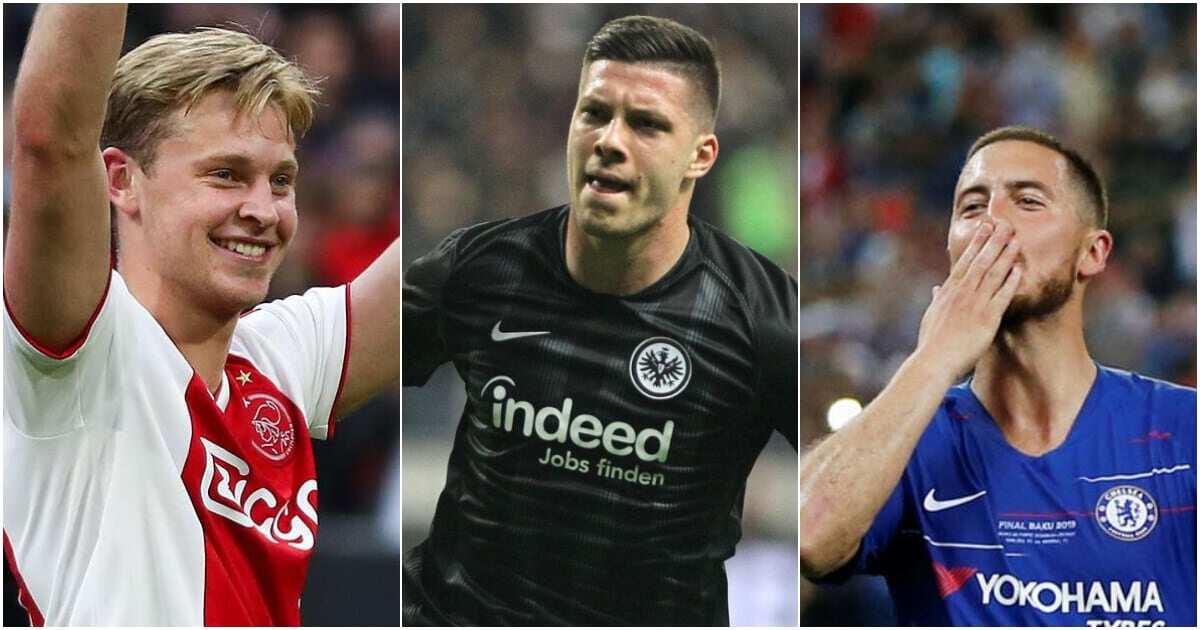 The summer transfer window was officially opened on Thursday, May 16, in England paving way for clubs to splash huge money on reinforcing ahead of the 2019/20 season.

Close to a month later, the football world has already witnessed pulsating and sensational transfer businesses.

From small-money deals to pre-contract agreements, the transfer window has already lived up to its billing.

READ ALSO: Andy Robertson reveals Hazard is the most difficult opponent he ever faced

Eden Hazard's summer move to Real Madrid in a five-year deal that could rise to £150m has been touted as the biggest deal so far this summer. However, TUKO.co.ke brings you nine others that have set the bar:

The creative midfielder had initially been linked with a move to the Premier League, with both Tottenham and Arsenal showing interest.

However, Demirba is now set to join Bundesliga side, Bayer Leverkusen, to replace outgoing Julian Brandt.

Thorgan, a younger brother to Eden was among the Hazard brothers who have made a big money move.

His impressive form last season that saw him net 10 goals and create 10 others at Monchengladbach, thereby emerging a hot prospect in the Bundesliga.

Dortmund eventually managed to lure him to Signal Iduna Park and will now form part of the club's talented attackline next season.

Premier League side, Wolverhampton Wanderers initially signed the star forward on loan from Benfica with a view of making the deal permanent.

His spectacular form in his maiden season in the Premier League saw him notch 13 league goals and bag seven assists.

As such, the Molineux outfit needed little persuasion to complete the signing of the Mexican.

Despite his stature in the France national team, the talented defender could not save Stuttgart from relegation this season.

His tactical versatility however influenced Bayern Munich's decision to acquire him ahead of next season with funds raised from his sale now expected to help rebuild Stuttgart in the second tier.

Real Madrid have ripped big from the ongoing summer transfer window as they seek to bolster their squad.

Their intent to compete for titles next season has seen them spend massively in acquisition of top talent.

Rodrygo now adds to the club's new squad members this summer, with the left winger arriving Santiago Bernabeu in a deal valued at £40m.

The deal was announced back in March but both clubs had to wait for the opening of the transfer window to ratify the move.

The Brazilian defender is expected to play an important role in Madrid's heart of defense.

The Serbian initially joined Frankfurt on loan from Benfica before the German side making the deal permanent for just £7million.

The youngster has enjoyed a successful stint in the Bundesliga, scoring more than 30 goals in 70 appearances.

He is now set to be part of Zinedine Zidane's new Real Madrid face.

The Dutch midfielder shot to prominence during the Champions League when a young Ajax side dumped Real Madrid out of the competition.

His exploits saw Barcelona lure him to Nou Camp where he could become a key signing for Ernesto Valverde's side.

Hernandez is among Atletico Madrid's squad members to leave the club in a massive exodus.

Bayern are understood to have been monitoring the Frenchman's situation at Wanda Metropolitano.

They finally managed to break the bank for his release clause to land his services.

Well, that was no surprise. But after months of speculation surrounding his future at Stamford Bridge, Eden Hazard finally managed to seal his dream move to Real Madrid.

Hazard was signed in an initial deal valued at £88million but could rise to a staggering £115million.

He has been touted to fill Cristiano Ronaldo's boots at Santiago Bernabeu.

Can Nigeria win AFCON 2019 with the current crop of players? | Legit TV