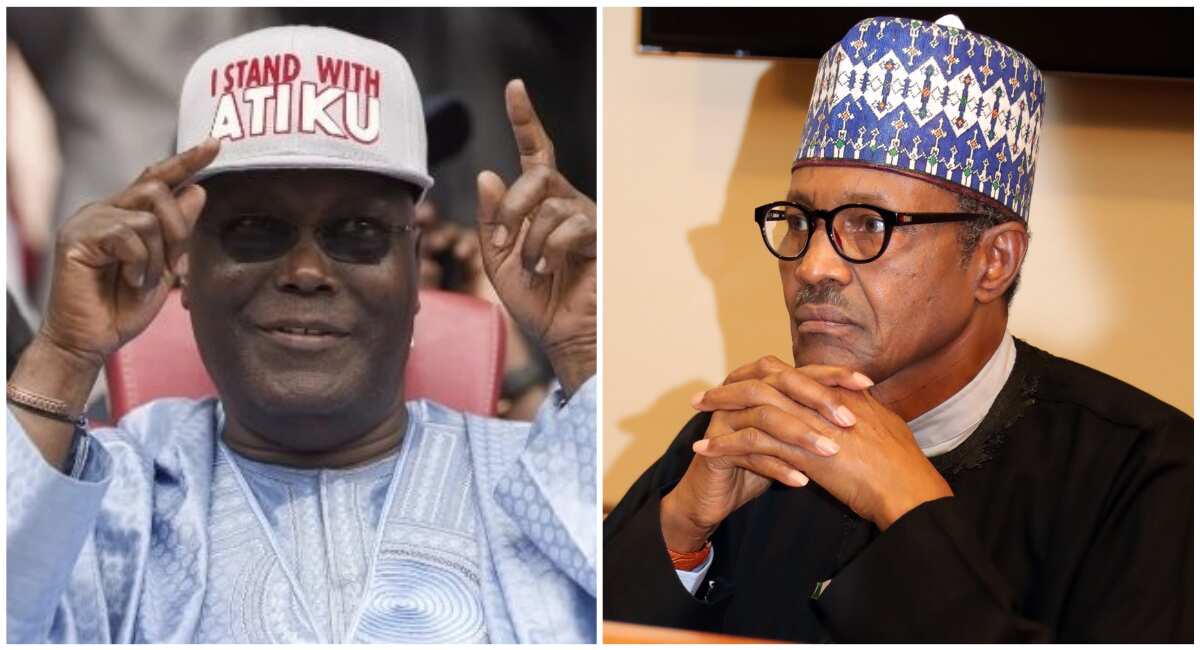 - The PDP lawyers reportedly switched off the TV after presenting their evidence, preventing Buhari’s counsel from playing his own tapes

- Justice Mohammed Garba, the presiding judge, subsequently adjourned the case to allow for a video equipment to also be presented to the tribunal by the president’s team

Lawyers to President Muhammadu Buhari were denied access to a video player by the Peoples Democratic Party (PDP)’s presidential candidate, Atiku Abubakar’s lawyers at the election tribunal on Monday, July 15.

A 48-inch Samsung television and Mac laptop had been brought in by the former vice president and his party, with which they played three videos downloaded from TV stations ahead of the 2019 polls, Daily Trust reports.

Legit.ng gathers that the tapes were tendered and played back by Atiku’s lawyer, Chris Uche (SAN), through the former spokesman of the PDP campaign, Segun Sowunmi.

They reportedly showed interviews by the chairman of the Independent National Electoral Commission (INEC), Prof Mahmud Yakubu and former resident electoral commissioner for Akwa Ibom, Mike Igini, discussing the use of a server for the election.

Subsequently, Buhari’s counsel, Alex Izinyon (SAN), sought to cross-examine Sowunmi with a CD of another interview by an INEC official, which he wanted to play on the petitioners’ equipment.

However, he was prevented from doing so, when the TV was reportedly switched off by PDP lawyers.

Uche, in his objection, stated: “You may show the witness the CD, but what I object to is to play the CD on my equipment.”

Izinyon expressed shock to the development, saying: “I can’t even believe that a counsel could be so bold to go to the TV and switch it off.”

Uche thereafter alluded to a “virus” infestation of the CD; throwing the courtroom into laughter. He further stated that the video had not been certified in compliance with the Electoral Act.

Justice Mohammed Garba, the presiding judge, stated that he did not want the case to degenerate into professional misconduct, and that he expected the lawyers to show good example by maintaining cooperation in the course of the matter.

The case was then adjourned till Tuesday, July 16 to allow for a video equipment to also be presented to the tribunal by the Buhari legal team.

Four of the video clips played at the presidential election petitions tribunal hall included a countdown of “Osun decides’’, a production of Channels Television with Seun Akinboloye as host.

2019 Election: Atiku heads to court to contest election result, can he win? - on Legit TV: