On Monday, July 15, the hospital announced that the twins had been successfully separated after more than 50 hours in surgery since October 2018.

The operation was conducted by a team of 100 specialists, with the final operation having been completed in February 11, 2019, The Guardian reported.

The girls were, however, not released until July 1, 2019, when medics at the heath facility declared they were well enough to leave the hospital. The team used a virtual-reality replica of the girls’ skulls to understand the relationships between the girls’ brains and blood vessels. Photo: GOSH
Source: Twitter

“I would be optimistic that by their third birthday they should be walking,” said one of the doctors who performed the operation.

The team used a virtual-reality replica of the girls’ skulls to understand the relationships between their brains and blood vessels and come up with the best strategy to separate them.

They also created 3D models to practice the surgery and develop cutting guides.

In multiple operations, surgeons then separated the brains and the blood vessels intertwined in the girls’ conjoined skulls. 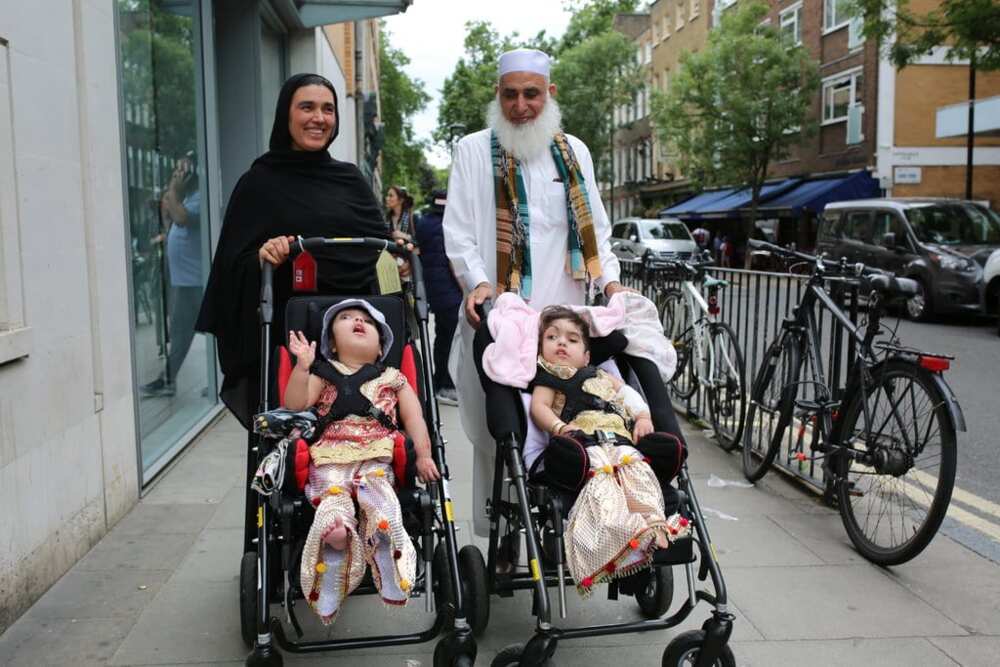 The girls were not released until July 1, 2019, when medics at the heath facility declared they were well enough to leave the hospital. Photo: GOSH
Source: UGC

They inserted a piece of plastic between the two brains to complete the separation internally.

The final major operation involved medics building new skulls using the girls’ own bone and tissue expanders to ensure each of the twins' skin would stretch over the top of their head.

During further surgery, the girls started to bleed after clots formed in Safa’s neck veins and she began to shunt blood to her twin, Marwa.

Concerned they might loose Marwa, after her heart rate fell, doctors gave her a key vein that the twins shared but this had an impact on Safa, who suffered a stroke less than 12 hours later.

The hospital then worked with physiotherapists and dietitians, among others, to help the girls recover and prepare for their lives in individual bodies.

According to the report, the surgery which was paid for by a private donor, was followed by several smaller procedure adding up to more than 50 hours of surgery time.

“We are indebted to the hospital and to the staff and we would like to thank them for everything they have done. We are extremely excited about the future," said the girls’ mother, Zainab Bibi.

The girls, whose father died of a heart attack while their mother was pregnant with them, were moved to a London address with their mother, their grandfather and an uncle.

Meanwhile, photos of a beautiful set of identical twins have left the internet buzzing because of who they are. Born of parents who are both dark skinned, this young twins children who could not be older than five years have left many agape.

The twins, though identical yet so different. They are a set of a boy and a girl. While the boy is dark-skinned, the girl is an albino. Despite their differences in skin, they share a special bond between them.

Did you know? NAIJ.com (naija.ng) is now-> Legit.ng We have updated to serve you better.