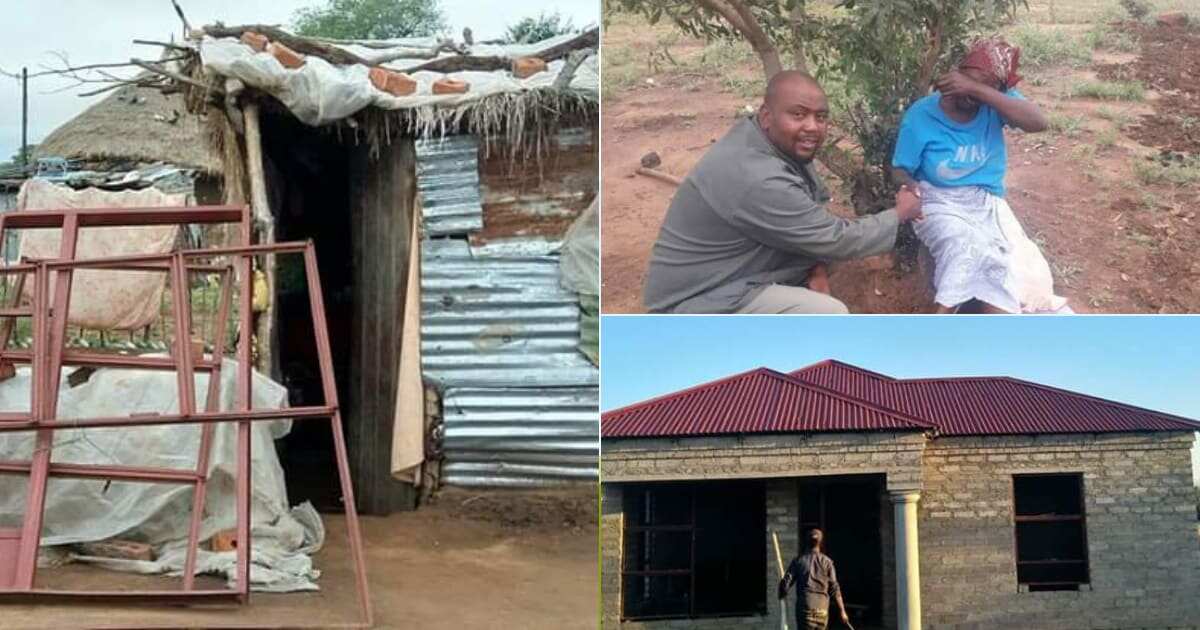 - A woman lived in a shack that was busy falling apart in Matsakali village in Limpopo, South Africa

- Through the aid of a kind pastor and other donors, the woman is getting a new home

The reality in South Africa is that most citizens cannot afford to buy or build their own home.

With the demand for housing always on the increase, the wait for a RDP house can last a lifetime.

As a result, many South Africans who are living in poverty, are forced to reside in shacks and this was a reality for one struggling woman, living in Matsakali village in Limpopo.

To make matters worse, Legit.ng gathered that her shack was in bad shape and needed some repair work.

Fortunately for her, Pastor Eric Maluleke was sent her way. With the assistance of other donors, the pastor is in the process of building the woman a new home.

Although not fully complete, one can sense the new home will be beautiful and solidly built.

The tweet went viral as social media users reacted positively to the news.

Mordecai: Esther's Foster Father‏ (@SontiMxolisi) said, “I'm so touched. When I see people collectively doing service delivery. May God bless you all. May he shine his face upon you. All those who have given may your well never run dry.”

Meanwhile, a wealthy Nigerian businessman identified on Instagram as Prince Obieze Nestor reportedly released 15 Nigerian youths who were arrested and imprisoned in the diaspora.

The rich man who is into oil and transportation businesses also allegedly gave the prisoners some money to start up their lives again. It was said that he gave them $5000 each, an equivalent of N1.8 million each.

Such act has caused many to react and rain praises on him. Read more: https://www.legit.ng/1249946-5-prsion-imates-lagos-reportedly-bag-degrees-national-open-university.html

Meet Port Harcourt-based Nigerian pastor who is changing the lives of the poor nationwide on Legit TV: